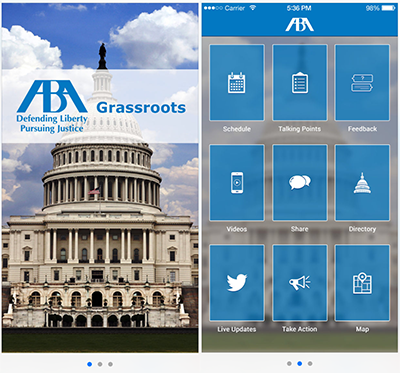 An app was created by the ABA Governmental Affairs Office to provide ABA Day resources.

Securing the financial ability of lawyers to meet the legal needs of the public will be the focus of ABA Day in Washington, D.C., as the association advocates for increased funding for the Legal Services Corp. and the preservation of the Public Service Loan Forgiveness program.

ABA Day, which is organized by the association’s Governmental Affairs Office, is an annual lobbying event. Attorneys from 48 states are scheduled to attend Wednesday and Thursday, according to a press release, meeting with their congressional representatives to ask them for their support. The GAO has created an app available for Apple and Android phones with helpful information for attendees and live updates and multimedia from the ABA Day events.

Last year’s ABA Day was heavily focused on preventing a threatened defunding of the LSC, which is the largest provider of civil legal aid and serves 1.7 million low-income Americans annually. That campaign was successful, and a $385 million appropriation was secured for the LSC. This year, ABA Day participants will be advocating for a $482 million budget for the LSC, bringing it in line with the LSC’s funding levels in Fiscal Year 2010 when adjusted for inflation.

The Public Service Loan Forgiveness program is also a top priority for the ABA. Qualified participants in the program were promised student loan forgiveness after 10 years of working in public service, including lawyers working for a variety of nonprofits. But in 2016, the ABA sued the Department of Education after its decision to drop some public interest lawyers from the program. There is also proposed legislation that’s been introduced in the U.S. House of Representatives that would end the program. “The ABA opposes efforts to repeal or end the program, such as in H.R. 4508, the PROSPER Act, and believes there should be some government incentive to help people who choose careers in public service,” the ABA Day press release states.

ABA Day is also when the association presents its annual Congressional Justice Award to four members of Congress who have shown leadership on issues the ABA feels are vital to the legal profession. This year’s honorees are Sen. John Cornyn (R-Texas), Sen. Dianne Feinstein (D-California), Republican Rep. Brian Fitzpatrick from the 8th district of Pennsylvania, and Democratic Rep. Nancy Pelosi of the 12th district of California. Their awards are scheduled to be presented Wednesday evening by ABA President Hilarie Bass at a dinner held at the Ronald Reagan Building and International Trade Center.

For more information on ABA Day, go to http://ambar.org/abaday, or follow the #ABADay hashtag on Twitter and visit @ABAGrassroots for updates on ABA Day events.