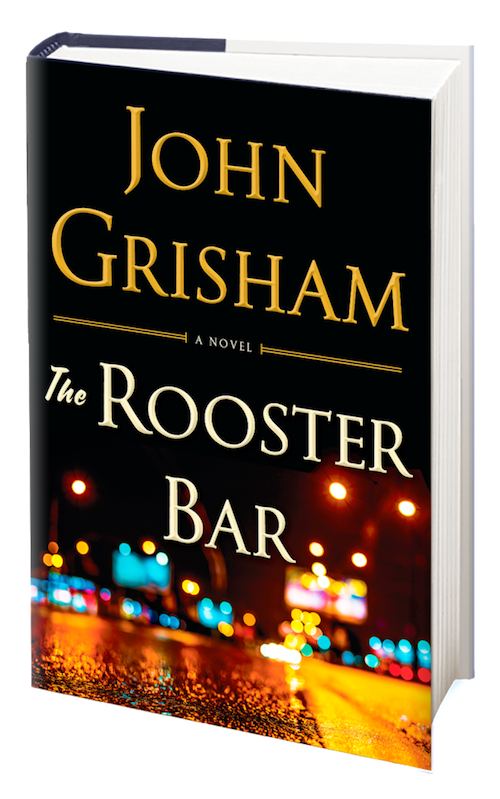 Third-year students at a for-profit law school who have accumulated huge amounts of student debt are the subjects of John Grisham’s latest legal thriller, The Rooster Bar.

The attorney-author told CBS News that his plot was inspired by a 2014 story in the Atlantic titled “The Law-School Scam.”

“I was not familiar with for-profit law schools and I was not really familiar with the student debt crisis,” Grisham told CBS. “And the article really opened my eyes. It was a great piece but also a troubling issue and I started researching and the novel was quickly born from that.”

Two InfiLaw schools—the Charlotte School of Law, which closed in August, and the Arizona Summit Law School—were recently put on probation by the ABA for not being in compliance with standards governing admissions and bar passage rates. A third school, the Florida Coastal School of Law, in January was flagged by the Department of Education for not meeting the agency’s gainful employment standard.

In Grisham’s book, a billionaire named Hinds Rackley owns the fictional Foggy Bottom Law School, which advertises that graduates easily get jobs with big salaries at fancy law firms. The schools are set up through shell companies, according to the New York Times’ review, and the Rackley character also owns collections agencies that target graduates of his schools for unpaid law school loans.

What do the deans of for-profit law schools think of the book? When contacted by the ABA Journal, Scott DeVito, dean of Florida Coastal, said in an email he didn’t “feel comfortable commenting on a fictional book inspired by a highly inaccurate article.”

However, DeVito noted his school’s statistics have changed in the three years since the Atlantic piece was published. According to DeVito, the bottom quartile of its LSAT scores as of 2017 is 145, compared to 141 in 2016. For 2018 admissions, he added, the school has set a bottom quarter LSAT score of 147.

Donald E. Lively, president of Arizona Summit, told the Journal he had not read the book.

“The only comment I can think of is that knowing Grisham’s work it should be entertaining and riveting, but I see it as fiction,“ he said.