For two days, all roads at the ABA Annual Meeting in San Francisco will lead to the expo 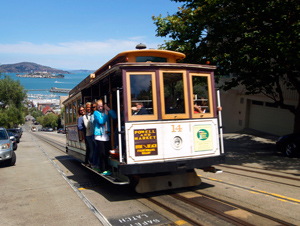 The ABA Expo will be open a total of only 10 hours during the association’s six-day annual meeting that opens Thursday in San Francisco. But during that time—four hours on Friday and six more on Saturday—the expo will be the place where annual meeting attendees want to be.

This year’s annual meeting, which will close Tuesday, Aug. 9, is expected to draw upwards of 5,000 attendees and guests to San Francisco. Like last year, the theme of the meeting is “Greatness in Every Direction.”

The headline event will take place Friday afternoon when FBI Director James Comey addresses a plenary session. Comey’s remarks will be followed by a panel discussion including experts on national security and electronic privacy.

At the reception, Marcia Clark, the prosecutor in the O.J. Simpson trial who now concentrates on writing books, will be interviewed by Kelly-Ann Clarke, a Houston lawyer and former chair of the Young Lawyers Division. Clark also will sign copies of her newest novel, Blood Defense, which was published in May.

The main stage at the expo will feature two programs on entertainment and the law. On Friday, “Pop Culture and the Perception of Justice” will feature David Kelley, a former Boston lawyer who has written and produced TV legal dramas such as L.A. Law , Boston Legal, Picket Fences; and Jonathan Shapiro, a former federal prosecutor who has worked with Kelley on several productions, including the upcoming eight-part Amazon Prime series on the law titled Goliath. The program will be moderated by Renee Montagne, co-host of NPR’s Morning Edition.

On Saturday, the writing life for lawyers will be discussed by Annette Gordon-Reed, a professor at Harvard Law School and expert on Thomas Jefferson whose most recent book, Most Blessed of the Patriarchs: Thomas Jefferson and the Empire of the Imagination, analyzes Jefferson’s character and philosophy. Gordon-Reed received a Pulitzer Prize for The Hemingses of Monticello: An American Family, which describes Jefferson’s intimate relationships with some of his slaves. Novelists Corbin Addison and Philip Margolin are also on the panel. The program will be moderated by Talmage Boston, a lawyer in Dallas whose book Cross-Examining History will be released Sept. 1.

Other programs being held at the expo’s main stage will include “The Art and Science of Visual Advocacy.” Ben W. Heineman Jr., the former general counsel at General Electric, will discuss his efforts to change the nature of inside corporate counsel in a program titled “Inside Counsel Revolution.” And on Saturday, Bank of America will present a program titled “Financial Well Being for American Bar Association Members.”

Two key events of the annual meeting will follow the close of the expo Saturday afternoon. The General Assembly will be held at the Moscone West, and California Chief Justice Tani Cantil-Sakauye will deliver the keynote address. And ABA President Paulette Brown of Morristown, New Jersey, will present the 2016 ABA Medal, the ABA’s highest award, to Dennis W. Archer of Detroit, the association’s first black president, who also served as a justice on the Michigan Supreme Court and as mayor of Detroit.

After the assembly, Brown will host the President’s Reception at the San Francisco Museum of Modern Art, which reopened in May after undergoing a major three-year expansion and transformation. The event will feature music for dancing and access to the museum’s galleries.