Corrected: Deema Nagib, a third-year student at Fordham University School of Law, has traveled dozens of times to the notorious Rikers Island jail complex to meet with detainees who shared horror stories with her about life inside.

“Rikers is a place that’s just crawling with abuse,” she said.

Nagib listened to detainees talk about being beaten by guards, subjected to filthy, inhumane conditions and deprived of dignity. Nagib took complaints from them while on an externship with the Prisoners’ Rights Project of the Legal Aid Society.

Fordham has been encouraging students like Nagib to become engaged in a variety of programs to expose them to the criminal justice system and help ensure greater access to justice. The school last year launched its A2J Initiative to bring it all together.

“Access to justice is a critical issue in our society,” Fordham Law School Dean Matthew Diller said. “The A2J program is really a connecting thread to all we do here.” As a Jesuit university, Fordham is committed to providing education in the service to others. “That has a deep resonance within our community of students, faculty and alumni.”

One of the initiative’s most recent programs was a Feb. 20 panel discussion moderated by 60 Minutes correspondent Scott Pelley about the impending closure of Rikers. The program featured several clips from a recent documentary, Rikers: An American Jail, by Bill Moyers in which detainees describe the dangers, the humiliation and fears of being incarcerated there. 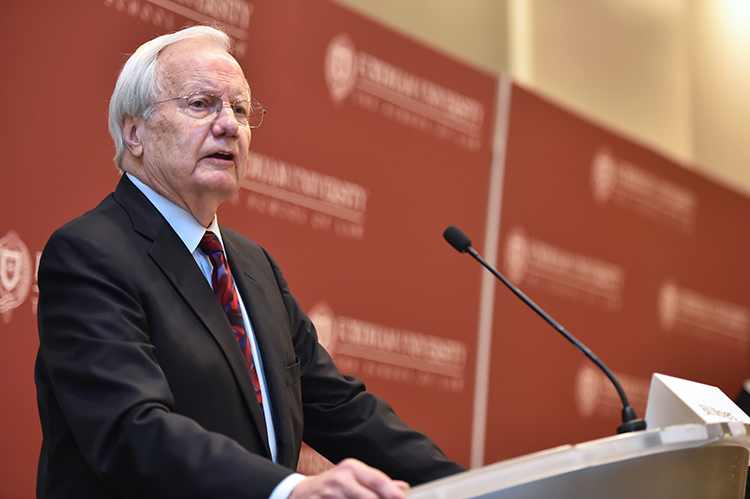 Moyers called Rikers “a microcosm of what’s wrong with criminal justice today,” and said it “embodies the scourge of racism.”

In making the documentary, Moyers said, “I wanted to put a human face on the culture of cruelty that flourished at Rikers.”

New York Mayor Bill de Blasio last year pledged to close Rikers within 10 years, but others have urged that the violence-plagued jail close sooner. The mayor’s announcement followed a report from an independent commission that found frequent assaults between detainees, fights between detainees and staff and dangerous, unsanitary and unsecure facilities.

Cheryl Bader, a clinical associate professor of law at Fordham, believes it’s important to immerse students in the realities of the criminal justice system, and visiting Rikers is one way to do it. “One of our goals is to have our students understand the complexity of the situation, to hear the voices of those in the system, and coming face-to-face to see the toll that incarceration takes on the client,” Bader said.

Michael W. Martin, director of clinical programs at Fordham Law, said the students eventually will be in positions to foster change and develop prison reform policies. “They are all the potential leaders of our future,” he said. “It’s important to unveil the complexity of these issues and for them to see these people are not monsters.”

Frank Kearl, a third-year student, said one of the reasons he went to law school was because he sees the prison system as deeply problematic. William Jones, a 1L, says he was inspired by Bryan Stevenson, author of Just Mercy. ““The character of a society is not how we treat the privileged few, but how we treat the less fortunate, the mentally ill, those who are incarcerated,” Jones said, paraphrasing Stevenson.

Stanley Richards, senior vice president of the Fortune Society, a nonprofit organization that helps previously incarcerated people get back on their feet, was once incarcerated at Rikers and knows the culture of violence well. “The way you survive is through violence, and you learn that from day one,” he said during the panel discussion. 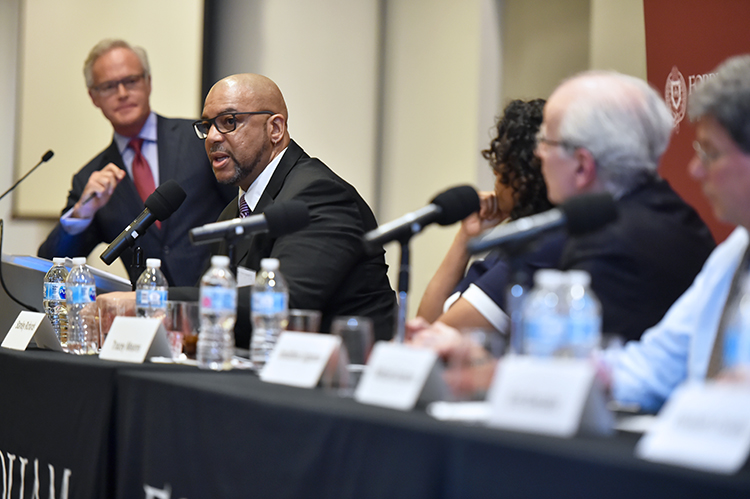 Former New York Chief Judge Jonathan Lippman, who is also a fellow with Fordham’s A2J initiative, served as chair of an independent commission that recommended closing Rikers and creating new facilities in each of New York’s boroughs. “Rikers is an accelerator of human misery,” Lippman said during the panel. “You come out worse than when you come in. Rikers doesn’t help public safety, it hurt public safety.”

Even at an estimated cost in the billions to close Rikers and build new jails, Lippman said it’s worth it. “There is no better investment than in closing this place,” he said. “This is about our values.”

Panelist Tracey L. Meares, professor at Yale Law School and visiting professor at Fordham, said that beyond the issues in the jails, policymakers must go deeper by addressing racial disparities and inequalities within the criminal justice system. “We need a new organizing principle,” she said. “We must treat the problem of crime in our communities. It’s a tragedy and is deforming our democracy.”

Nagib agrees that the problems at Rikers are systemic, and that closing one facility won’t solve the larger issues. “Unless they change the culture of corrections, nothing is going to change with the closing of Rikers,” she said. “It’s very symbolic.”

In an earlier version of this story, a quote from student Frank Kearl that said: “The character of a society is not how we treat the privileged few, but how we treat the less fortunate, the mentally ill, those who are incarcerated”  was misattributed. The quote should have been attributed to William Jones.