Formal office attire is a must at this law firm; name partner says younger lawyers should take note

If you want to work as a lawyer at the Greenberg Gross law firm in Costa Mesa, Calif., be prepared to look the part.

Lawyers at Greenberg Gross have to wear courtroom attire to the office, according to firm co-founder Wayne Gross, who illustrated the proper look in a photo for the Orange County Business Journal (PDF). Gross favors three-piece suits, reading glasses by Tumi, seven-fold ties, and a Patek Philippe Calatrava watch. 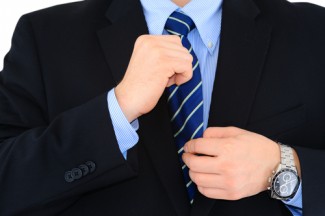 Gross, the 2013 president of the Orange County Bar Association, elaborated on his views last August in a President’s Page (PDF) for the OC Lawyer Magazine.

“Like it or not,” he wrote. “the legal profession is steeped in tradition. Clients expect that all lawyers, including newly minted ones, will dress, speak and act in a manner befitting the profession. Judges and juries do too. This at times puts the younger generation of lawyers at a distinct disadvantage because they have been raised in a ‘casual’ era. They use, for example, the word ‘like’ where it, like, doesn’t belong. They often were never taught restaurant etiquette of older generations, eating in a manner that would make my parents cringe. They rely on social media for their news and to exchange information with others, causing them to frequently examine their smartphones for updates, even in the middle of discussions with others. In short, there is a reason law firms infrequently allow younger lawyers to entertain clients: Firms don’t trust that young lawyers can do it effectively.”

Gross says his firm requires male lawyers to wear a tie to work five days a week and requires business etiquette training for all its lawyers. His firm was also featured in an office-design feature in the Orange County Register (PDF).

Hat tip to Above the Law, which notes that Gross is a former partner at Greenberg Traurig.