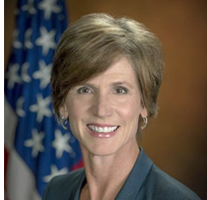 During the interview, Yates reportedly told the lawyers about concerns she shared with the Trump administration about Flynn, then the national security adviser, the Wall Street Journal (sub. req.) reports.

Yates was worried Flynn had misled Pence, making him a potential blackmail target for the Russians, she previously said in congressional testimony. Flynn has pleaded guilty to lying to the FBI about the sanctions conversation; his discussion with the FBI took place on Jan. 24.

Shortly after Yates met with McGahn, he reported his discussion with Yates to Trump, an anonymous source told the Journal. McGahn also allegedly told Trump that Flynn had told the FBI there was no discussion on sanctions, the source said.

Trump then allegedly asked McGahn for more information, and McGahn asked Yates for a second meeting that occurred the next day, a source said.

During that conversation, McGahn reportedly asked about two statutes that bar false statements in criminal investigations and unauthorized negotiations with foreign governments, people familiar with the matter told the Journal.

Trump asked Comey for his loyalty on Jan. 27, Comey told Congress. On Feb. 14, Comey says, Trump told him “I hope you can see your way clear to letting this go, to letting Flynn go.” Trump fired Comey in May.

According to the Journal, the Mueller team’s interest in discovering what the White House knew about the Flynn probe before he fired Comey could be relevant to an obstruction of justice case.