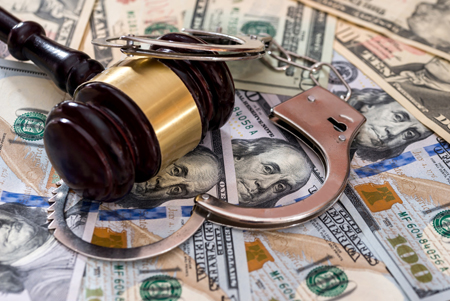 Updated: The former chief financial officer of Dewey & LeBoeuf spent the night in jail after missing the first of three payments on a $1 million fine, but was released early Friday morning when his current law firm paid the entire $1 million.

Joel Sanders left a New York City courtroom in handcuffs on Thursday after the judge, Robert Stolz, refused to reduce or eliminate the fine, the American Lawyer reports.

“I find the defendant willfully failed to pay his fine,” Stolz said. “I find the claimed inability to pay here not credible.”

The Manhattan District Attorney’s Office had sought incarceration. In a court filing, prosecutors said Sanders’ assets are more than enough to pay the entire fine, imposed after his conviction for misleading lenders and bond buyers about the firm’s finances before its 2012 collapse.

“Sanders has shown, once again, that he does not think any rules apply to him,” the filing says. Law.com had coverage in stories published by the New York Law Journal and the Daily Business Review.

The first payment was due on Sept. 12. On Oct. 25, Sanders filed a motion for resentencing because of “dire financial circumstances” that also alleged the fine was unconstitutionally excessive.

Sanders was sentenced in October 2017 to 750 hours of community service and ordered to pay the $1 million fine over a three-year period. Sanders did not get any jail time, but Stolz had said failure to pay the fine would land Sanders in jail until he pays up, for up to one year.

Greenspoon Marder co-managing director Gerald Greenspoon had written a letter of support earlier in the proceedings, asking the judge to revoke the $1 million fine. Greenspoon said Sanders’ departure from the firm would be “a serious detriment.”

“His firm backed him up with this, they were able to come up with the money,” Sanders’ attorney Christopher Oprison told American Lawyer. “They value Joel, they think he’s a tremendous individual.”

Oprison said he did not know what arrangements the firm and his client may have made for Sanders to repay them, but said he was “pretty optimistic” that the fine would be reversed on appeal.

Prosecutors said Sanders’ annual salary at Greenspoon Marder is at least $375,000. He also owns a house “free and clear” in Long Island that he values at $650,000, and a beachfront, ocean-view Miami condo with a $150,000 mortgage that he values at $1 million, prosecutors said. The legal filing suggests that the residences actually are worth much more.

Prosecutors also pointed to forms Sanders filed last year when he opened two securities accounts that said he had $500,000 in mutual funds and $300,000 in cash and cash equivalents.

Sanders said he wants his two adult sons to live in the New York home. Prosecutors said the sons are believed to be ages 25 and 30. “Sanders is free to support any adult he chooses, but he is not free to prioritize doing so over satisfying the conditions of his sentence,” the legal filing says.

Sanders’ lawyer says Sanders paid $350,000 to Dewey’s bankruptcy trustee and has spent more than $2.5 million in attorney fees and other costs.

Story updated on Nov. 15 to report on Stolz’s decision to send Sanders to jail, and on Nov. 16 to report that Greenspoon Marder paid Sanders’ fine.