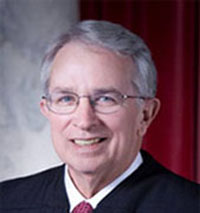 A former justice on West Virginia’s Supreme Court of Appeals has pleaded guilty to a single felony count of wire fraud for personal use of a state vehicle.

Menis Ketchum, 75, pleaded guilty Thursday in a probe sparked by an outcry over $3 million in spending on renovations of Supreme Court justices’ offices, report Courthouse News Service, the Parkersburg News and Sentinel, the Associated Press and a press release.

Ketchum had served on the state’s top court from January 2008 through July 2018, and resigned ahead of a vote this month to impeach the entire state supreme court for failing to develop guidelines for the use of public resources. The impeachment trial is pending.

Ketchum admitted to repeated use of a state-owned car and a state gas card to travel from his home to a private golf club, costing the state about $220 a trip, according to the press release. The guilty plea relates to a single golf trip using the car in 2014 in which he swiped his electronic fuel card to pay for gas.

The maximum sentence is 20 years in prison. Sentencing is scheduled for Dec. 6.

Ketchum had received permission from his judicial colleagues to use the car for his commutes to and from the court beginning in 2012, but had stopped using it in mid-2016 when one justice raised questions about personal use of state vehicles, according to a stipulation of facts.

Another justice, Allen Loughry, was suspended after an indictment that claims he used a state vehicle and fuel credit card for personal use, lied about his involvement in pricey renovations at the court, and used a state-owned antique desk at his home. He and another justice, Robin Davis, were accused in the articles of impeachment of unnecessary and lavish spending on office renovations. Davis resigned after the impeachment vote.