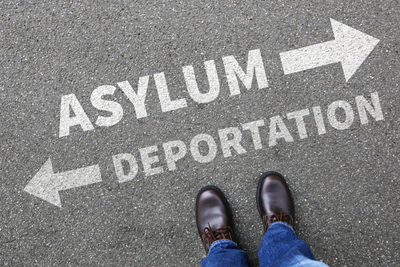 Up to 13,500 immigrants who have received asylum may be deported because the law firms they used were found to be coaching them in what to say, NPR reported last Friday.

The asylum claimants are people whose cases were handled by a group of 30 lawyers, paralegals and interpreters in New York who were found in 2012 to be presenting fraudulent claims. Many were convicted of helping their clients—mostly Chinese nationals—obtain asylum by lying about their experiences in their home countries. They handled roughly 3,500 people’s cases and the remainder involving family members, whose immigration status derives from the clients, could also be affected.

A translator who helped federal prosecutors six years ago says federal authorities are going after the clients. That translator, who NPR called by the pseudonym Lawrence, is hiding from the government because he believes the clients are also victims of the law firms’ fraud and doesn’t want to help deport them.

“Because targets are different,” he said. “Those Chinese immigrants—those clients … their attorney just tell lie to them, to do that.”

Lawrence is a Chinese immigrant who arrived in New York in 2005 and took a job as a translator in 2007. In the small law office where he worked, he saw the office manager coach clients about what stories to tell to win an asylum claim. Because it’s easiest to win asylum when claiming troubles at home come from the government, those stories generally centered around China oppressing people who agitated for democracy, defied family-planning policies or practiced Christianity or Falun Gong.

Lawrence began coaching clients to relay stories like these when he moved to a larger law office, writing hundreds of fake stories that embellished considerably on real-life experiences. That ended when the FBI called and flipped him into a cooperating witness. His help resulted in considerable leniency on his sentence—instead of facing up to 25 years in prison, he served just six months of probation.

Lawrence relocated to the Southwest, but the government called on him again starting in 2014, looking for help identifying clients he knew had lied on their asylum applications. The number of clients they wanted help with started ramping up in early 2017, from 20 cases at the start of the year to 2,000 in June. Though Lawrence helped initially, he believes the focus on the clients is wrong because they just did what their lawyers said to do—and because asylum recipients would be treated harshly if returned to China.

NPR was able to confirm that the government is reviewing of all the asylum cases generated by the corrupt law offices. Immigration lawyers told NPR that’s not unusual, but the government didn’t pursue the clients when those offices were originally prosecuted. Each case would have to be individually fact-checked, a process requiring the government to look into incidents from many years ago in another country that may not cooperate.

Each case would need to be reopened in immigration court, potentially generating thousands of new cases.