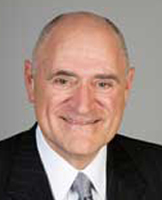 A former president of the Pennsylvania and Philadelphia bar associations has sued sheriff’s deputies who tackled him at the courthouse last summer, causing him to fracture his shoulder.

Clifford Haines, 72, claims “extraordinary misconduct” by the officers whose actions were “unprovoked, unjustified, and clearly excessive and abusive,” report Philly.com and the Legal Intelligencer.

A video of the incident shows Haines pointing his finger at an officer, then spreading his arms. The officer appears to slightly push Haines’ chest, and Haines moves his arm as if to deflect the officer’s hand. At that point four officers shove Haines onto the conveyor belt on the metal scanner, and a fifth officer joins in to push Haines off the machine and onto the ground.

The incident occurred in August at the Philadelphia Justice Center. Haines was arrested, but prosecutors declined to file charges after reviewing the video.

The suit says Haines had to enter the courthouse through the general screening area because he had forgotten his bar card. Haines realized that he had forgotten to turn off his cellphone, which had been locked in a pouch during the screening process. When he tried to return to the front of the building to turn off the phone, a deputy “rudely” ordered him to leave through a different area, the suit says.

Haines said he complied, but reprimanded the deputy when he returned to the screening area. When the officer shoved him, Haines says, he repeated his reprimand. He was tackled after that, the suit says.

Haines claims he remained handcuffed for an hour even though he told deputies he was in pain from his shoulder injuries.

The suit claims assault and battery, false arrest and intentional infliction of emotional distress. The suit names as defendants five unidentified deputies and an unidentified sergeant.

Haines’ lawyer, Patricia Pierce, said the case shows why members of the public don’t trust law enforcement. “You have to ask yourself: If this can happen to this man in front of cameras, how is anybody else supposed to feel safe?” she told Philly.com.

A spokesperson for the sheriff’s office did not comment when reached by Philly.com. In August, a spokeswoman for the department had said “it took a couple of officers to subdue” Haines following a dispute between the lawyer and a deputy.

Corrects spelling of Haines in fourth paragraph at 3:58 p.m.