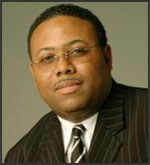 Jurors deliberated less than two hours after a four-day trial, before convicting Ballentine on Friday of making false statements to lenders and bank, mail and wire fraud, the Chicago Tribune reports. He formerly hosted The People’s Attorney.

More than two dozen home sales in and around Chicago between 2004 and 2006 were at issue in the case. Prosecutors said Ballentine knew that the buyers, who had been recruited by others, had been fraudulently qualified for loans used to purchase the homes.

However, defense lawyer Lewis Myers Jr. said afterward that Ballentine knew nothing of the mortgage fraud and merely acted as a closing attorney, earning about $8,000 in total. Meanwhile, the masterminds made millions.

An appeal is expected. Ballentine faces a maximum of 30 years in prison when he is sentenced in January.