Former politician's sentence is among the longest for a US congressman 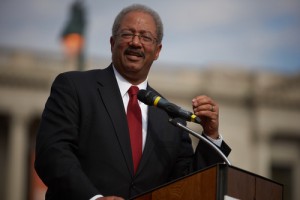 Former U.S. Rep. Chaka Fattah was sentenced Monday to 10 years in prison for corruption, a term that is less than the amount sought by prosecutors but still among the longest sentences for a member of Congress.

U.S. District Judge Harvey Bartle III imposed the sentence, report Philly.com, the Legal Intelligencer, the Washington Post, Philly Voice and Politico. Fattah and four other co-defendants will also have to pay $600,000 in restitution.

Philly.com cites a defense filing that says seven out of eight congressmen sentenced under federal corruption laws since 2000 received shorter sentences than Fattah. Other publications report the penalty is one of the longest sentences ever imposed on a congressman for corruption.

Fattah, a Democrat, had represented Pennsylvania. He resigned after his conviction on racketeering, bribery and other charges in June.

Prosecutors had sought a term of 17 to 22 years in prison. Fattah was accused of arranging an illegal $1 million loan for his 2007 mayoral campaign, and repaying part of it with federal grant money and charitable funds. He was also accused of using campaign funds to pay expenses and accepting bribes from a fundraiser who wanted an ambassador appointment.

Bartle stressed the need to deter public corruption by making an example of Fattah, according to the Legal Intelligencer account. “Those in high places will … know what happens in this courtroom today,” Bartle said.

Previous:
Partner profits increase even as law firm demand remains flat; is it an unsustainable model?