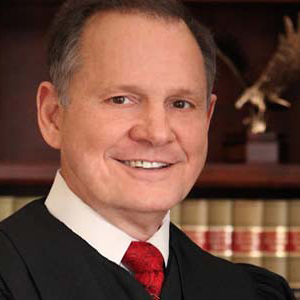 A former Alabama chief justice once known as the “Ten Commandments judge” and who is a Republican candidate for the U.S. Senate is facing accusations that he dated and fondled a 14-year-old girl nearly 40 years ago.

Roy Moore was twice suspended from the bench, once for refusing to obey court orders to remove a Ten Commandments monument from a courthouse.

Four women tell the Washington Post that Moore initiated relationships with them when he was in his early 30s and they were teenagers. Leigh Corfman was 14 when Moore allegedly pursued her in 1979. The others ranged in age from 16 to 18.

None of the women said they had intercourse with Moore, and Corfman was the only woman who said her relationship progressed beyond kissing. Moore wasn’t married at the time.

One woman said Moore pursued her, but her mother wouldn’t allow her to go out with him. Two others said their mothers approved of them dating Moore; one said her mother considered him “good husband material.”

Corfman said she remembered Moore giving her alcohol. Another said she drank wine and tropical cocktails with Moore on dates, and believes she was 18 when that occurred. The legal drinking age in Alabama at the time was 19.

Senate Majority Leader Mitch McConnell of Kentucky said Moore should withdraw from the Senate race if the allegations are true, Politico reports. The special election to fill the seat vacated by current U.S. Attorney General Jeff Sessions is scheduled for Dec. 12.

In a written statement to the newspaper, Moore called the allegations “completely false” and “a desperate political attack by the National Democrat Party and the Washington Post on this campaign.”

Corfman says she was 14 when she first met Moore at the courthouse in Etowah County, Alabama. She was sitting on a bench with her mother and Moore offered to stay with her while her mother attended a child-custody hearing. Moore asked the girl for her phone number and later took her to his home on two occasions, according to Corfman.

The first time Moore allegedly kissed Corfman, and the second time he allegedly undressed her to her underwear. According to Corfman, Moore touched her through her bra and underwear, and guided her hand to touch his underwear. Corfman says she yanked her hand back, got dressed and asked Moore to take her home. He complied. She says she refused Moore’s additional requests for dates.

Corfman, now 53, said she was reluctant to come forward with her story because “I’m not an angel.” She has been divorced three times and has “a messy financial history,” according to the Post.

The newspaper contacted the women after hearing a rumor that Moore had pursued relationships with teen girls. Corfman said she agreed to speak after praying about the matter.

Two of Corfman’s childhood friends said she told them she had seen an older man, and one of the friends remembers his name was Roy Moore. Corfman said her friends convinced her she had done something bad, and she kept the relationship a secret for years.

According to the Post, the legal age of consent in Alabama is 16. One law makes it a misdemeanor for someone age 19 or over to sexually touch someone between the ages of 12 and 16. A second law makes it a felony to entice a person younger than 16 to enter a home with the purpose of proposing sexual intercourse or sexual fondling.

The statute of limitations for an offense under the second law would have run out three years later, the Post says.