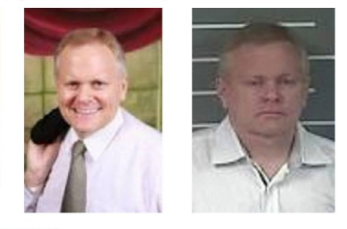 Updated: A lawyer has been captured in Honduras after fleeing the United States to avoid sentencing for bribing an administrative law judge to obligate the government to pay more than $550 million in lifetime disability payments.

Eric C. Conn was was arrested while leaving a restaurant in La Ceiba, the Honduran news publication El Pais reported. The Lexington Herald-Leader, the Louisville Courier-Journal and CBS covered the report.

Police reportedly learned of Conn’s location after he connected to the restaurant’s wi-fi.

The FBI confirmed the arrest, which occurred after Conn ate at a Pizza Hut. Conn arrived in Lexington, Kentucky, on Tuesday night, report WHAS11, the Lexington Herald-Leader and Lex18.

On Wednesday, Conn pleaded not guilty to an escape charge in federal court.

Conn’s lawyer, Scott White, initially told the Herald-Leader and the Courier-Journal he didn’t have any official word on the capture, but it appeared Conn was taken into custody by some uniformed group.

“Given the security situation in Honduras and the dangerous gangs operating there,” he told the Courier-Journal in an email, “who knows who these masked folks are, for whom they work, or if Eric has even been lawfully seized. Those may or may not be issues for either our courts or the Honduran courts.”

If Conn was lawfully captured and is legally returned, “this comes as no surprise,” White said in the email before Conn’s arrest was confirmed. “The FBI usually gets their man.”

News coverage of Conn’s court appearance on Wednesday did not refer to any issues with the arrest. A Justice Department press release said Conn was arrested with assistance from the Agencia Tecnica de Investigaciones Criminales de Honduras and the FBI’s Legal Attaché in San Salvador, El Salvador.

White told the Herald-Leader in a story published on Wednesday that if Conn hadn’t fled, he might have been able to reduce his 12-year sentence to nine or 10 years and serve 85 percent of the total. “It was quite a gamble that he took” by allegedly escaping, White said.

Conn was sentenced to 12 years in prison in absentia in July, a month after he fled. One of his former employees, Curtis Lee Wyatt, has been charged with helping Conn escape by opening a bank account for him and buying him a truck.

Conn was accused of paying more than $600,000 to the judge, David Black Daugherty, who pleaded guilty and was sentenced to four years in prison. Another judge, Charlie Paul Andrus, was convicted for conspiracy to retaliate against a former employee who provided information to investigators. He was sentenced to six months in prison.