“Conversion therapy,” which seeks to change an individual’s sexual orientation or gender identity, has been rejected by a long list of medical organizations, James J.S. Holmes told the ABA’s House of Delegates on Tuesday.

Holmes, the outgoing chair of the ABA’s Commission on Sexual Orientation and Gender Identity, spoke in favor of Resolution 112 (PDF). He said conversion therapy has been rejected because it’s ineffective, unnecessary, contrary to the medical understanding of identity and risks serious harm to the patient. Minors in particular are vulnerable, he said, because they often have no choice and are vulnerable to “shame-based technologies.”

“It’s a fraud. It’s an unfair, deceptive practice,” said Holmes, a partner at Sedgwick’s Los Angeles office. “It causes harm and it must be stopped.”

At least four jurisdictions—California, New Jersey, Oregon and the District of Columbia—have passed laws forbidding licensed professionals from performing this kind of therapy on minors. The House passed the resolution without opposition.

Also passed was Resolution 113 (PDF), urging governments to adopt the recommendations in the November 2014 report of the U.S. Attorney General’s Advisory Committee on American Indian/Alaska Native Children Exposed to Violence. Sponsored by the Section of Civil Rights and Social Justice (formerly Individual Rights & Responsibilities), it urges, among other things, that tribal governments be permitted to try any person committing a crime against a child in Indian territory. 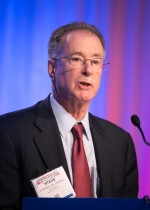 The report (PDF) notes that Alaska Native children suffer shockingly high rates of violence. Tribal governments are often powerless to prosecute offenders because tribes have no jurisdiction at all over non-Native child abusers. Adoption of the report’s recommendations would change that.

“You know what gets filed under seal,” he told the delegates. “So this resolution basically says let’s give the court the resources they need to protect our data.”