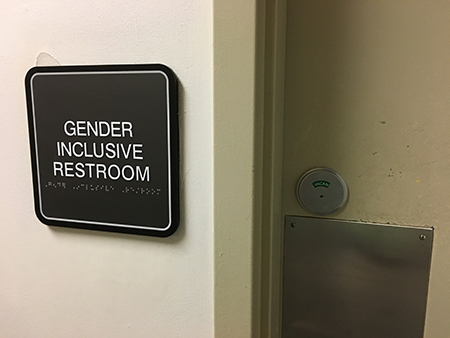 Updated: Yale Law School wants to make its single-user restrooms gender-neutral. But to meet Connecticut building code, it must have a certain number of bathrooms designated and assigned by sex.

The state’s deputy building inspector refused the law school’s request for a code modification in December, and the finding was upheld by the codes and standards committee in March. The university filed an administrative appeal this week in the State of Connecticut Superior Court, the New Haven Register reports.

“Some of the student proponents of the shift had reported being made to feel uncomfortable when using gender-specific bathrooms. The proposed shift in designation to gender-neutral and associated code modifications would facilitate quick access to a bathroom within the building for persons of all gender identities, eliminate discomfort expressed by trans and gender nonconforming law school students in using gender specific restrooms and promote the equal treatment of trans and gender-nonconforming students,” states the complaint (PDF) which was filed Friday.

A spokeswoman for Gov. Dannel Malloy said on Tuesday his administration would seek to grant Yale’s request, Reuters reports.

The structure in question is the Sterling Law Building, which was built in the 1920s. If the law school wants to meet building code and make the single-user restrooms gender-neutral, it would need to add more restrooms so that it meets the code-required number of facilities assigned by gender. That’s not feasible, according to the complaint, because of space considerations and the architectural significance of the building’s interior space. Also, the filing states, it’s anticipated that the International Plumbing Code for 2018 will require that single-occupancy restrooms be identified “for use by either sex.”

And a number of cities, including New York, San Francisco and Washington, D.C., already require single-occupancy public bathrooms to be gender-neutral, according to the New Haven Register. The state’s Department of Administrative Services did not have a comment on the matter, its spokesperson told the ABA Journal. 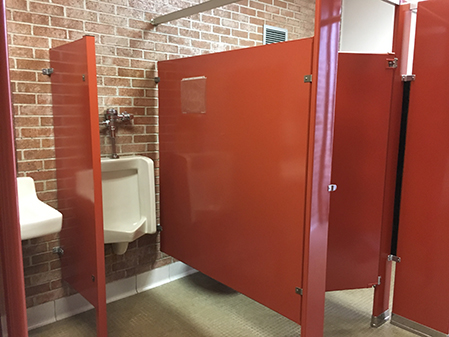 The interior of a gender-neutral restroom at Western New England University School of Law. Photograph courtesy of Erin Buzuvis.

While having an adequate amount of restrooms for women in spaces seen as traditionally male has sometimes been a battle, increasingly law schools are introducing gender-neutral restrooms, says Erin Buzuvis, a Western New England University law professor who writes at Title IX Blog.

The federal education law would not require a certain number of school restrooms designated by gender, says, adding that “it certainly doesn’t prohibit” gender-neutral facilities.

“When all the bathrooms are gender-neutral, everybody has the same opportunity to pee,” says Buzuvis, who also directs her school’s Center for Gender & Sexuality Studies.

“There’s still a boatload of privacy,” she says, adding that she hasn’t heard any negative feedback about the gender-neutral restrooms

“What’s been more common is to talk about this with students who are also queer, and are excited about it. We’re posing in front of it and taking photos.”

Updated at 8:01 a.m. Tuesday with new 4th graf to include comment from Connecticut’s governor.