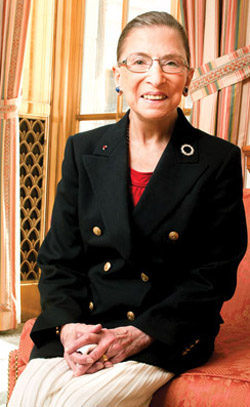 In a broad-ranging discussion on the subject of abortion, Justice Ruth Bader Ginsburg Saturday reiterated and expanded her continuing disenchantment with the legacy of Roe v. Wade.

Speaking to several hundred students Saturday at the University of Chicago School of Law, Ginsburg said the sheer sweep of the controversial 1972 decision short-circuited the development of a political groundswell that was building at the state and local level—not only on the issue of abortion—but on all phases of women’s rights.

“Roe seemed to have stopped the momentum,” said Ginsburg, who described what she had hoped would be a more evolutionary process. “It mattered that Roe went as far as it did.” Ginsburg, now 80, appeared as the featured guest at the school for a program titled: “Roe v. Wade at 40.” In the discussion moderated by constitutional scholar Geoffrey Stone, Ginsburg said the court could have, and should have, avoided a broad-based decision.

Rather than rule narrowly against a Texas law that was one of the most onerous abortion statutes in the nation, the court swept away even the least restrictive state abortion laws of the time. And by focusing on issues of privacy, rather than a woman’s right to make her own life decisions, the court made itself a convenient political target for the anti-abortion movement.

“Roe became a symbol for the right to life movement. They have an annual parade now every year on the day in January when it was decided,” Ginsburg said.

Moreover, the structure of Harry Blackmun’s majority opinion, which included such technical details as a discussion of the state’s interest in pregnancy trimesters, seemed to gloss over the moral and political dimensions of the broader debate that was taking place across the country—on divorce, property rights, occupational opportunities and other issues of equality that were becoming important to women.

“The (abortion) cases now are all about restrictions on abortion and not about the rights of women,” Ginsburg said.

Ginsburg said that Roe came at a time when women’s issues were beginning to take hold in many state legislatures, as well as in the courts. Abortion, which was illegal to varying degrees in all but four states, wasn’t the hot-button issue it has been the last three decades. Republicans were more likely than Democrats to support more liberal abortion laws. And issues like no-fault divorce were making headway because of a rational give-and-take between state legislatures and the courts.

Ginsburg was a prominent litigator on women’s issues at the time of Roe, and Stone—who clerked for Justice William Brennan as Roe was being decided—recalled her as having a knack of picking cases that presented gender equality issues in terms that were easily understood by the nine sitting justices of the time—all men. One involved a widow who, under Idaho state law, could not administer her dead son’s estate. Another involved a widowed father who could not receive social security survivor’s benefits to help rear his infant child.

In another, Frontiero v. Richardson, Ginsburg argued that the husband of Sharron Frontiero, an Air Force lieutenant, should receive the same spousal benefits as a military wife. Ginsburg won the case, which argued that regulations making gender distinctions should receive strict scrutiny by the courts. But Justice Brennan, who wrote the majority opinion based on Ginsburg’s arguments, could get only three other votes. The case was decided by a plurality.

Asked how she felt about winning Frontiero by plurality, Ginsburg said, “I thought: I wish Justice Brennan would have avoided it (a decision) until there were five (votes).”

At the same time Roe was being considered, Ginsburg was pressing her own abortion case before the court, Struck v. Secretary of Defense. The plaintiff Susan Struck, an Air Force captain had become pregnant while on duty in Vietnam—a violation of military regulations—and was suing to avoid being discharged from the Air Force. Abortions were legal on military bases at the time, but Struck—although she was a nurse—had not considered that alternative because of her religious beliefs. Thus the issue involved Struck’s right to resist a government-sanctioned abortion to avoid her discharge from the service. It was a choice Ginsburg thinks would have better framed a woman’s constitutional right as a choice no man would be required to endure.

“I wish that (Struck) had been the first case,” said Ginsburg. “I think the court would have better understood.”

The case was granted certiorari, but was rendered moot later when the military agreed to waive Struck’s discharge. Ginsburg said she tried to revive the case, and even asked Struck if there were any issues of inequality that might allow the case to move forward. Struck said she had been denied the chance to become a pilot.

“We all laughed,” said Ginsburg. “In 1972 that was still an impossible dream.”