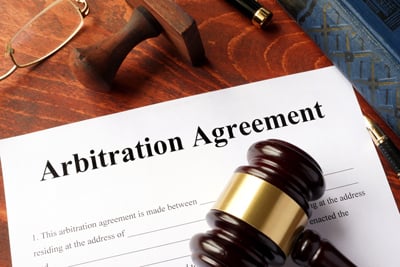 Victims of sexual harassment on the job should be allowed to evade “the impediment of arbitration requirements” in employment contracts, according to a letter signed by attorneys general of every state and U.S. territory.

The letter expressed support for “appropriately-tailored legislation” that would free victims of workplace sexual harassment from “the injustice of forced arbitration and secrecy.”

“These arbitration requirements often are set forth in clauses found within the ‘fine print’ of lengthy employment contracts,” the letter says. “Moreover, these clauses typically are presented in boilerplate ‘take-it-or-leave-it’ fashion by the employers. As a consequence, many employees will not even recognize that they are bound by arbitration clauses until they have been sexually harassed and attempt to bring suit.

“While there may be benefits to arbitration provisions in other contexts, they do not extend to sexual harassment claims.”

The letter says secrecy requirements of arbitration clauses keep settlements confidential and prevent other similarly situated people from learning of sexual harassment claims. “Ending mandatory arbitration of sexual harassment claims would help to put a stop to the culture of silence that protects perpetrators at the cost of their victims,” the letter says.

The letter praised Microsoft for waiving a contractual requirement in some of its employment contracts that had required arbitration for harassment claims. The company had never enforced the provision and won’t rely on it in the future, chief legal officer Brad Smith announced in December.

Microsoft endorsed the Ending Forced Arbitration of Sexual Harassment Act of 2017, which would make would make mandatory arbitration in harassment cases unenforceable under federal law.