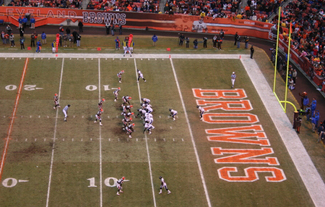 Shout It Out Design / Shutterstock.com.

Given the choice between a football career and the law, an Ohio State University graduate has nixed a chance to try out for the Cleveland Browns.

Former linebacker Andrew Sweat tweeted that he didn’t want to take a chance of suffering a severe concussion in the National Football League, the New York Daily News reports. He had already had several in college play.

Above the Law urged him to give football a try, but as a CNN article notes, he might make more, in the long run, as a lawyer. And, as Sweat points out, he’s more likely to retain his health that way.

Although ATL expressed concern about Sweat’s legal career prospects in a difficult economy, news reports say he expects to be able to work for his father’s law firm after he earns his degree.

Next:
Around the Blawgosphere: Bloggers Weigh in on LegalZoom IPO Filing; Vote for Best Law Firm Website