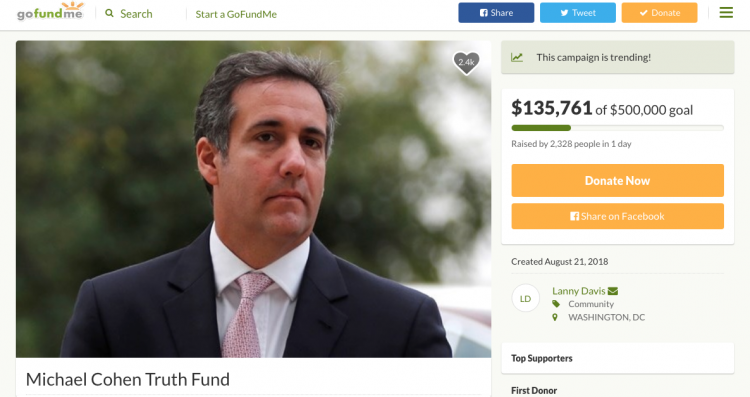 A GoFundMe page for Michael Cohen’s legal fees had raised more than $135,000 by Thursday morning even though Cohen’s lawyer, Lanny Davis, gave an incorrect domain name in early television interviews that led people to a website for President Donald Trump.

The GoFundMe page is labeled Michael Cohen Truth Fund, with a goal of raising $500,000, the National Law Journal reports. Davis and Guy Petrillo are representing Cohen.

Davis initially said the fundraising address was michaelcohentruth.com, which was a nonexistent website, Fox News reports. Later, online visitors to the domain name were redirected to a site that seeks donations for Trump’s re-election.

Cohen pleaded guilty Tuesday to charges of bank fraud, tax fraud and campaign finance violations. Cohen’s admission said Trump had directed him to make payments to two women who had alleged they had affairs with Trump.

Davis appeared on several networks on Wednesday, saying Cohen is “100 percent willing to talk” to special counsel Robert Mueller “about everything and to cooperate with Mr. Mueller,” the Wall Street Journal reports. Though Cohen’s plea agreement doesn’t require cooperation, he could cooperate in hopes of reducing his sentence.

Davis told MSNBC’s Rachel Maddow that Cohen had “knowledge about the computer crime of hacking and whether or not Mr. Trump knew ahead of time about that crime and even cheered it on.”

Cohen has also been subpoenaed to testify in a New York state probe of the Donald J. Trump Foundation.

Davis told NPR that Cohen has no interest in being “dirtied by a presidential pardon,” the Washington Post reports. Cohen “has flatly authorized me to say under no circumstances would he accept a pardon from Mr. Trump,” Davis said.

The comment led the National Law Journal to ask whether someone can reject a pardon. Washington, D.C., lawyer Margaret Love, told the publication that the answer was probably no. “It is an act of state, not a gift you can say ‘no thank you’ to,” she said.

Supreme Court precedent is ambiguous, according to the article. In the 1833 decision United States v. Wilson, the high court said a pardon could not be forced on a man who received a death sentence for killing a postal worker. “A pardon is a deed, to the validity of which delivery is essential, and delivery is not complete without acceptance,” the court said.

But in the 1927 case Biddle v. Perovich, the Supreme Court said a man who received the death penalty for murder could not reject a commutation to life in prison. “The public welfare, not his consent, determines what shall be done,” the court said.

Previous:
Judge resigns after he is accused of using contempt powers to jail more than 200 people