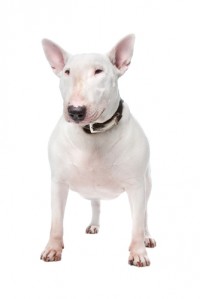 A scammer seeking to trick an Arizona attorney into cashing a fake $198,000 check was foiled when the pitch wound up in a law firm email account for the lawyer’s dog.

As a joke, Scottsdale attorney Mark Goldman has an email account for his bull terrier, Walter, who has an honorary law degree and his photograph on the firm’s website, KPHO reports. But someone apparently didn’t get the memo about Walter’s true persona and, in a recent email, asked the dog to represent a foreign client in a collection matter. In exchange for serving as a conduit, he could take a cut of the proceeds before forwarding the bulk of of the money from a fake cashier’s check to the “client.”

Walter didn’t bite, but his master and the station publicized the scam attempt to warn others. Reportedly, tens of millions of dollars have been lost through similar fraud attempts on other attorneys.

ABAJournal.com: “Man accused of scamming attorneys out of $70M gets over eight years in prison”