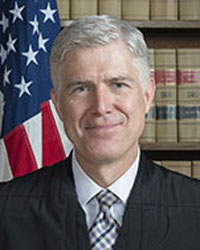 Justice Neil M. Gorsuch is the likely decisive voter in a case challenging mandatory collective-bargaining fees for government employees, but he offered no hint of his thinking in oral arguments on Monday.

Gorsuch asked no questions in the case, Janus v. AFSCME, report the New York Times, the Washington Post, USA Today and the Wall Street Journal. According to the Journal, “Other justices compensated for that reticence, their views breaking sharply along a conservative-liberal divide.”

USA Today describes the arguments as “an animated, at times angry, debate.”

Illinois employee Mark Janus, who isn’t a union member, maintains he doesn’t have to pay mandatory fees for collective bargaining. His case seeks to overturn the 1977 Supreme Court decision Abood v. Detroit Board of Education. The case held that public employees may be required to pay mandatory fees to unions for collective bargaining, but not for political or ideological activity.

Janus contends the collective bargaining fees are unconstitutional because he is forced to support the speech of a union bargaining representative who is negotiating on political issues such as wages, pensions and benefits.

Some conservative members of the court appeared to agree with Janus during the arguments, while liberals argued overturning Abood would create confusion and overturn more than 20 states laws.

Justice Anthony M. Kennedy is “the court’s most ardent supporter of broad First Amendment rights,” according to the Times. He found fault with the mandatory collective-bargaining fees, calling them “compelled subsidization of a private party, a private party that expresses political views constantly.”

On the other side, Justice Sonia Sotomayor said a ruling for Janus could threaten unions. “You’re basically arguing, ‘Do away with unions,’ ” she told a lawyer for Janus.

Sotomayor also pointed out that the United States had switched its position from its prior stance supporting the union in a 2016 case that split 4-4 on the issue.

“By the way, how many times this term already have you flipped positions from prior administrations?” Sotomayor asked.

How Appealing links to additional coverage.