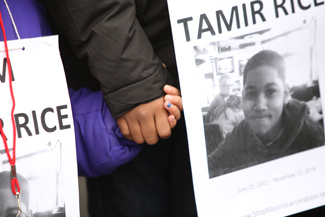 Children hold hands at a protest in New York City held on Nov. 22, 2015, the anniversary of Tamir Rice’s death. Photo from a katz / Shutterstock.com.

A grand jury in Cleveland has declined to indict police officers in the shooting death of 12-year-old Tamir Rice, who was killed in November 2014 while playing with a toy gun in a park.

Cuyahoga County, Ohio, prosecutor Timothy McGinty said he didn’t recommend charges because the officers had a reasonable belief that the gun was real, the Washington Post reports. The New York Times and Cleveland.com also have stories.

McGinty said the shooting was a “perfect storm of errors,” but that neither the officer who shot Rice nor his partner acted criminally. The officers had responded to a report of a young man pointing a weapon at people. The dispatcher didn’t relay the caller’s comment that the gun was probably a toy.

Officer Timothy Loehmann had said he fired two shots after seeing Rice remove an item from his waistband that Loehmann believed to be a real gun.

Experts hired by the prosecutor’s office issued three reports that found the use of force to be appropriate, while three experts hired by Rice’s mother said the shooting was unreasonable.

The city of Cleveland agreed to change how officers use force in a May consent decree with the U.S. Justice Department.