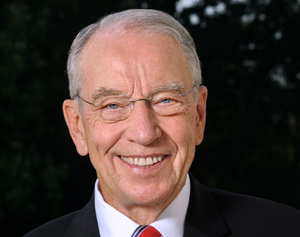 CNN broke the news. “I’ve advised the White House they ought to reconsider,” Grassley, an Iowa Republican, said as he left a Judiciary Committee hearing. “I would advise the White House not to proceed.”

Senate Judiciary Committee spokesman Taylor Foy told The Hill that Grassley was concerned about statements made by Talley and Mateer, who are nominated to judgeships in the Middle District of Alabama and the Eastern District of Texas, respectively.

Talley is an author of horror fiction and a former member of a paranormal research group in Tuscaloosa, Alabama. Slate reported on Nov. 15 that Talley posted to an Alabama fan message board under the handle BamainBoston. One post using the handle said the early Ku Klux Klan “was entirely different” and an initial leader distanced himself from the group after it turned to racial violence.

Slate says the statement perpetuates “a pernicious myth that the nascent Klan was noble and benevolent.” From its inception, the KKK promoted white supremacy and opposed efforts to protect the civil rights of freed slaves Slate says. The leader didn’t renounce the Klan until several years after the group became “notorious for its relentless brutality,” according to Slate.

Talley was rated “not qualified” by the ABA Standing Committee on the Federal Judiciary because it believes he doesn’t have the requisite trial experience or its equivalent, the committee chairman said in a Nov. 7 letter (PDF).

Mateer once characterized a lawsuit over a transgender child’s bathroom access as evidence of Satan’s plan, according to a September report by CNN. He also criticized gay marriage after referring to arguments in the U.S. Supreme Court case that found gay couples had a fundamental right to marry.

“We’re back to that time where debauchery rules,” Mateer said.

Foy told The Hill that “revelations of Talley’s statements surfaced only after he was reported out of the Judiciary Committee.”

Foy said Mateer’s nomination paperwork hasn’t been received by the Judiciary Committee “and no further action is scheduled.”