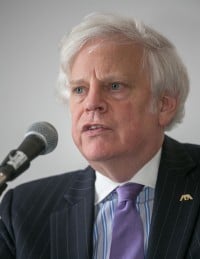 Two days before his term as ABA president comes to an end, James R. Silkenat made one more impassioned plea for action by the legal profession and other groups to address the continuing epidemic of gun violence in the United States.

“Gun violence is a difficult and emotionally charged topic,” Silkenat said Saturday at an ABA showcase program on the topic, “but we’ve got to take steps to reduce it.”

Silkenat described a new product being advertised as one of the latest examples of the scope of the problem: bulletproof blankets for infants. “I’m immeasurably offended by that,” he said. “We shouldn’t treat shootings like tornados or other natural disasters, random and unexpected.”

The need to reduce gun violence has been one of Silkenat’s primary themes during his year as ABA president, but in calling for appropriate measures to regulate access to firearms, he also has acknowledged the politically sensitive nature of the issue in this country. Silkenat, a partner at Sullivan & Worcester in New York City will end his term Monday with a closing speech to the House of Delegates. The ABA is holding its 2014 Annual Meeting in Boston through Tuesday.

Other speakers at the program sponsored by the Standing Committee on Gun Violence picked up on Silkenat’s call for action, but they said the primary battleground over regulating guns will be in the political realm rather than the courts. 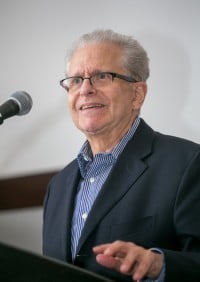 Although the U.S. Supreme Court has affirmed that the right of individuals to own guns is protected by the Second Amendment of the Constitution, the gun rights jurisprudence of the court still is developing, said Harvard law professor Laurence H. Tribe, especially on the issue of regulating how guns are manufactured and sold. But despite ruling on the broad meaning of the Second Amendment, the justices have largely left more specific issues of gun ownership for the lower courts to hash out. “Inevitably, they have reached conflicting decisions,” he said.

One area of potential conflict among the appellate courts is how the First Amendment applies to gun regulations in the context of the Second Amendment, Tribe said. He cited a July 25 decision (PDF) by the Atlanta-based 11th U.S. Circuit Court of Appeals holding that a First Amendment right of physicians to discuss gun safety issues with patients was trumped by the Second Amendment. “It’s a ruling that I find implausible,” he said.

Ultimately, Tribe said, “sustained educational and political efforts are more important than blaming the Roberts Court for its rulings.”

Jonathan E. Lowy, director of the Legal Action Project at the Brady Center to Prevent Gun Violence, opened his presentation with a brief tribute to the center’s namesake, James Brady, who died on Monday. Brady was Ronald Reagan’s press secretary in 1981 when he wounded in an assassination attempt on the president. Brady’s story “showed what one bullet can do,” Lowy said. “It affected him and his entire family, and ultimately it killed him.”

The Office of the Medical Examiner for the Northern District of Virginia conducted an autopsy of Brady and found the cause of death to be the gunshot wound and its consequences, the Washington Post reported. The medical examiner ruled Brady’s death a homicide.