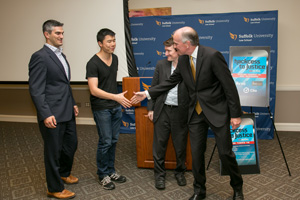 Jim Sandman (right) congratulates the team that created
Due Processr at the Hackcess to Justice event.
Photo by Kathy Anderson.

Award winners from the recent Hackcess to Justice legal hackathon are working hard to fulfill the main goal of the event: Improving access for all Americans to effective legal assistance.

In the two weeks since the inaugural hackathon—in conjunction with the ABA Annual Meeting—took place at Suffolk University Law School in Boston, the programmers and lawyers behind the three winning entries have hardly sat back and rested on their laurels. Instead, they have all taken steps to try and increase the reach of their apps. For instance, all three apps are now available for the general public to use, and in some cases, the prize winners are speaking to nonprofit and state agencies to figure out ways their apps can be used to provide legal assistance to many more individuals.

William Palin, a Somerville, Massachusetts, attorney who won first place with his health care proxy and living will generator PaperHealth, tells the ABA Journal that the app has already been approved by Apple and is now available in the App Store. He says that he is currently talking to a nonprofit legal network in Vermont in the hopes of increasing awareness of his app. “What I’m proposing is that, if the state will provide an attorney to review the legality of the app, then I’ll adjust and customize it for the state, and then provide it for free, as long as they promote it,” says Palin, who hopes to do this with every state in the country.

The second-place winning app, disastr, which was created by Matthew Burnett, director of the Immigration Advocates Network, and Adam Friedl, program and special initiatives manager at Pro Bono Net, has been officially released for Android. The app provides information, resources, real-time news and alerts and legal representation forms for people affected by natural disasters. Burnett and Friedl did not respond to a request for comment.

Meanwhile, David Colarusso, staff attorney for the Massachusetts Committee for Public Counsel Services, has been busy talking to state officials about potential uses for his team’s app, Due Processr. The app, which took third place and was developed by Colarusso and his teammates, David Zvenyach, a general counsel in Washington, D.C. and William Li, a computer science PhD student at the Massachusetts Institute of Technology, is an interactive tool that allows users to determine their eligibility for indigent legal services in Massachusetts, and for criminal defendants to calculate their state prison sentences. Colarusso tells the ABA Journal that he has been speaking with the state’s Commissioner of Probation about the indigence calculator in the Due Processr app. “They expressed to me that they’re doing something similar and were interested in comparing notes,” says Colarusso, who says he hasn’t met with the commissioner’s office yet. “It was nice to hear that they see the potential for this technology.” He also says that he is in touch with a local nonprofit that works with pro se parties about utilizing the app to generate fee waivers.

Both Palin and Colarusso credit the hackathon for introducing them to like-minded civic hackers. “This was my first hack-a-thon,” Palin said. “I thought it was eye-opening. It was interesting to see how excited people are about technology from a legal perspective, and to see these legal minds get together and work out a problem.”

Colarusso, who didn’t know either of his teammates before the event, concurs. “We’ve been shooting emails back and forth over the last couple of weeks about things we could work on together, as well as improvements on Due Processr,” says Colarusso. Colarusso also points to a planned class at MIT on legal hackathons as a great chance for people to stay in touch, as well as create new projects. “I spoke to [Dazza Greenwood, who is in teaching the hackathon course at M.I.T.], and one thing that came out is that they could use some materials as problem sets,” Colarusso said. “I hope to put together some sets that address problems me and my colleagues would like to solve. It could be that it spawns a lot more apps.”