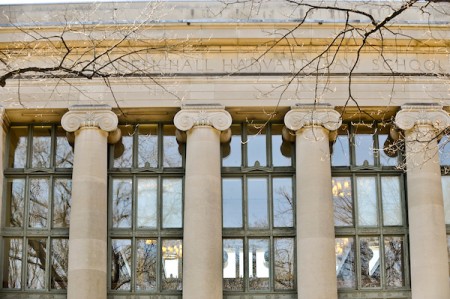 Harvard Law School will accept the Graduate Record Examination in lieu of the Law School Admissions Test, starting this fall. The change is part of a strategy to expand law school access domestically and internationally.

“Harvard Law School is continually working to eliminate barriers as we search for the most talented candidates for law and leadership,” Martha Minow, dean of the law school, said in a statement. “For many students, preparing for and taking both the GRE and the LSAT is unaffordable. All students benefit when we can diversify our community in terms of academic background, country of origin, and financial circumstances.”

In accordance with the ABA Section of Legal Education and Admissions to the Bar accreditation standards, Harvard completed a study earlier this year comparing the GRE and LSAT scores of current and former Harvard law students who took both tests, and found that the GRE is equally valid to the LSAT for predicting first-year grades.

The ABA’s Legal Ed council is meeting in Santa Monica this week, and is expected to consider a revision (PDF) to Standard 503, which would establish a process to determine the reliability and validity of other tests.

Currently, the University of Arizona’s James E. Rogers College of Law accepts the GRE as an entrance exam. The Educational Testing Service, which administers the GRE, conducted a study for the Arizona law school. Marc Miller, the school’s dean, told the ABA Journal that he thought the GRE was as good or better as the LSAT for reliability in predictions.

According to a 2016 study (PDF) by Kaplan Test Prep, which surveyed 125 law schools, 56 percent indicated they had no plans to adopt the GRE as an alternate admissions test, and 14 percent reported that they did; 30 percent were not sure.

“We think that number is likely to increase over the next few months,” Jeff Thomas, executive director of Kaplan Test Prep’s prelaw programs, said in a statement.

He advised people thinking about law school to continue taking the LSAT, unless their only application choices are Harvard or Arizona.

“One other point to consider is that over the past few years, law schools across the United States have experienced slumping applications and enrollments, which has even led to some law schools closing or merging,” the statement reads. “While Harvard is in no danger of falling into any of those categories, other law schools may see the GRE option as a way to grow their applicant pools and as a way to diversify their student bodies, which has long been a goal for many.”

Last updated March 10 to remove the reference to Harvard having submitted its completed study to the ABA.