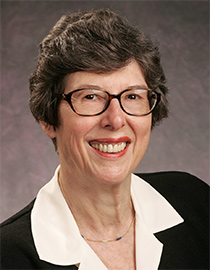 Herma Hill Kay, the first female dean at the University of California Berkeley School of Law, died Saturday. She was 82.

Kay, who joined Berkeley in as a professor in 1960, died in her sleep, interim Berkeley Dean Melissa Murray told The Recorder.

“She was super bright. She cared about all the right things. She was an outstanding legal educator, both in the classroom and through her writings,” U.S. Supreme Court Justice Ruth Bader Ginsburg told the publication. The two met in 1971 at a Yale Law School conference about women, and in 1974 wrote a casebook about sex discrimination.

A 1959 graduate of the University of Chicago Law School, Kay also played a key role in California legislation for no-fault divorce, which then-Gov. Ronald Reagan signed into law in 1970. Her teaching and scholarship focused on marital law and sex-based discrimination, according to Brian Leiter’s Law School Reports.

“As I observed in a California Law Review symposium dedicated to Herma: ‘She literally transformed the legal landscape of American family life. In the late 1960s and 1970s, as a revolution in substantive sex equality was sweeping California, Herma was at its center,’” wrote Leiter, a professor at the University of Chicago Law School.

Kay served as dean of Berkeley Law from 1992 to 2000. She also was a past president of the Association of American Law Schools and the Order of the Coif, a national honor society for law school graduates in the top 10 percent of their classes, according to her American Bar Association biography (PDF). A 1992 winner of the Margaret Brent Award, Kay also served as a member of the Council of the ABA Section on Legal Education and Admissions to the Bar from 1992 to 2001, including two years as secretary. And she served on the American Bar Foundation’s board of directors.

Kay had been working on a book about 14 women law professors, all of whom preceded her with tenure at ABA-accredited law schools. Justice Ginsburg wrote the introduction.

Next:
86 percent of low-income Americans' civil legal issues get inadequate or no legal help, study says