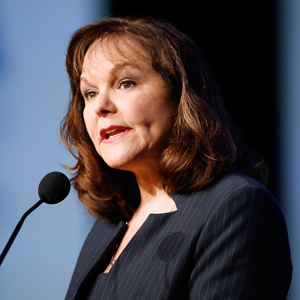 Hilarie Bass accepted the position of president-elect of the American Bar Association on Tuesday at its annual meeting in San Francisco in a speech that began with one of the reasons why she’s worked over the years for equality and an end to discrimination.

Bass’ grandfather came to the United States more than 100 years ago, fleeing persecution in Europe, speaking only Polish and Yiddish and having little money.

“He could not have imagined that the granddaughter who bears his name would be standing before you today as president-elect of the American Bar Association,” Bass said.

Many in this country no longer see any opportunity for freedom and prosperity because they have no access to the justice system, Bass said, and the justice system has implicit bias along lines of race, gender, religion and income. Lawyers need to accept and embrace technological innovation, so it can be used to increase access to justice for all.

Bass has held many positions in ABA leadership, including being a member of the Board of Governors and the chair of the Section on Litigation. Bass’ work with the litigation section led to the creation of the Implicit Bias Initiative.

Bass called on the ABA to take the lead to ensure that people “can believe that our civil and criminal justice system is truly blind to color and gender and religion and to income inequality,” she said.

And she blamed fear of losing work to innovative ways of providing legal services for the legal profession being behind other professions in adopting technological advances.

“But it is clear that the longer our profession refuses to adopt and adapt its practices to new technologies, the more opportunities there are for alternative services providers and web-based platforms that have found ways to use technology to provide legal services in a more efficient and less costly manner—in many cases reaching people previously unserved by traditional providers of legal services,” Bass said.

The practice of law will look very different in the next few years with those competing service providers, and consultants and accountants will continue to expand into law practice.

Bass said the ABA can and must lead in the change, as it has done with the Commission on the Future of Legal Services. 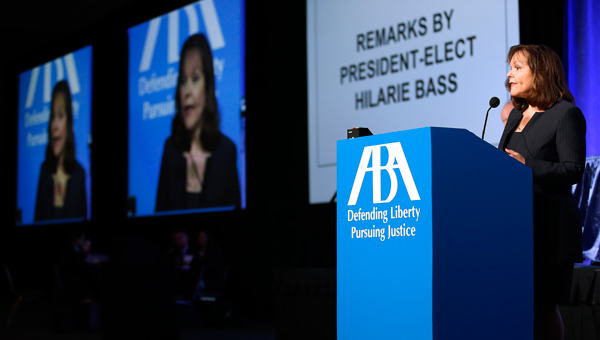 Hilarie Bass addresses the ABA House of Delegates at the 2016 annual meeting. Photo by Tony Avelar.