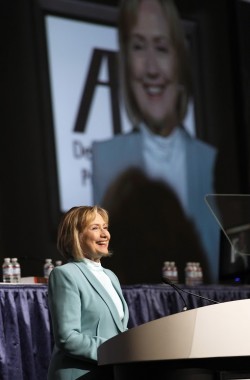 Former Secretary of State Hillary Clinton called strongly for protection and restoration of voting rights Monday when addressing the ABA’s House of Delegates and announced that it was the first in a series of policy-oriented speeches she intends to give in coming months concerning problems that challenge not just society and government, “but to our legal system they are strains on our social contract.”

Clinton, long a familiar face at ABA gatherings and the first chair of its powerful Commission on Women in the Profession in 1987, seemed to be setting up substantive-area groundwork for running for president in 2016.

The main topic of this speech was voting rights. In Philadelphia at the National Constitution Center she will talk about balance and transparency in national security policies after a decade of wars and facing new threats. Then in Florida, she plans to talk about the U.S. role in global leadership and its moral standing around the world.

But Monday, she keyed in on the U.S. Supreme Court’s recent negation of the Voting Rights Act of 1965—especially the valued requirement for preclearance of new voting law rules and policies in jurisdictions with histories of discrimination in voting matters.

The House of Delegates approved a resolution Monday urging Congress to move quickly to legislatively restore sections of the Voting Rights Act of 1965 in response to the U.S. Supreme Court’s ruling in Shelby County v. Holder.

Clinton talked about how law is important to a system in which the people have ownership of the government.

After noting the ABA’s extensive efforts in promoting the rule of law around the world to spread that approach, Clinton said: “Throughout our history, we have found too many ways to exclude people from their ownership of the law.”

Noting the “phantom epidemic of election fraud” used to justify harsh, restrictive new voter identification laws, she spoke at length about “tricks to keep away some voters” who usually are racial minorities and younger voters.

“Remember that a lot of damage will be below the radar at the local level,” Clinton said, urging the lawyers to get involved in grassroots responses. “That’s where the Voting Rights Act was so important.”

Lawyers, Clinton said, have a “unique ability to drive progress to right wrongs and help our nation live up to our finest ideals.”