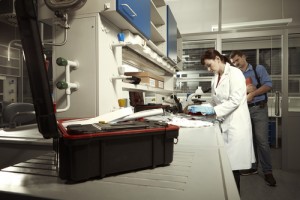 The State Crime Lab in Wyoming has cut employees and stopped processing certain types of evidence as it copes with an increased workload and a reduced budget.

The workload has led to a slowdown in evidence processing that has the potential to compromise justice, according to Laramie County District Attorney Jeremiah Sandburg. He tells the Wyoming Tribune Eagle that his office went to trial a couple times without lab results because the evidence was still being processed. In addition, some driving under the influence cases have been dismissed because blood tests weren’t completed before trial, he says.

Prosecutors are also more reluctant to file charges early because they are waiting on test results, Sandburg tells the publication. “We definitely hold back [with] charging in certain cases now to make sure that we have the evidence,” he said.

The lab’s $6.1 million two-year budget was cut by 4.6 percent earlier this year. Since 2012, the number of its full-time workers has dropped from 100 to 90. In May, the lab announced it will no longer accept requests for hair, fiber, physical match, glass and head lamp analysis. Those services aren’t available in most nearby states either, according to the lab.