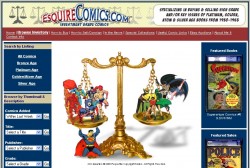 Lawyers often identify with superheroes, but sometimes don’t get much validation for it. However the library at Yale Law School offers a bit of that, with the new exhibition “Superheroes in Court: Lawyers, Law and Comic Books.”

Mark S. Zaid, a Washington, D.C., lawyer and comic book collector, organized the exhibition, which today got a mention in the New York Times Arts Beat blog. It features illustrations of Superman on the witness stand being accused of murder (falsely, of course) and a handcuffed Batman and Robin, facing a jury full of Jokers, literally.