How different would our world be today had the Magna Carta never been sealed? 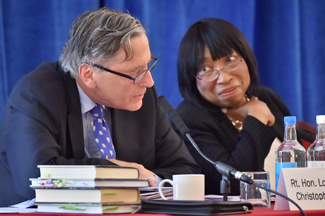 Call it the “butterfly effect” from 800 years ago: What if King John had decided to stick it to his nobles and not affix his seal to the Magna Carta?

That was the question a panel of judges and academics considered during the 2015 ABA London Sessions commemorating the 800th anniversary of the sealing of Magna Carta.

Jonathan Turley, a law professor at George Washington University School of Law and high-profile legal commentator, moderated the panel that including Lord Justice Christopher Clarke of the Court of Appeal in the United Kingdom; Judge Bernice B. Donald of the Cincinnati-based 6th U.S. Circuit Court of Appeals; Judge Delissa Ridgway of the U.S. Court of International Trade, and Ian Williams, a University College of London lecturer.

The panelists kept the audience engaged by positing several counter-factual hypotheticals and asking those in attendance to vote via remote control whether they believed something would still have occurred had the Magna Carta not been issued. Among the topics considered was whether well-established legal traditions and principles such as trial by jury, habeas corpus and personal liberty would exist in the same form had the document never existed.

The panelists seemed fairly confident that several important principles of common law, namely trial by jury and the adversarial system, would still exist. Williams noted that, before jury trials became the norm, defendants were usually subjected to trial by ordeal (e.g. if she sinks, she was innocent; if she floats, she’s a witch). 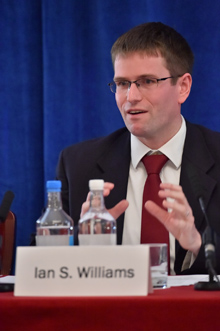 Ian Williams of the University College of London. Photo by Simon Apps.

“The main reason we lost trial by ordeal wasn’t necessarily due to Magna Carta,” said Williams. “The Vatican forbade its priests from taking part, and they were a necessary part of trials by ordeal.”

Williams also pointed to a well-known case in England where a murder defendant was executed, only for the victim to turn up alive and well later on. Grand juries were already being used at that point, Williams noted, and petit juries soon sprang up as a result.

As for the adversarial system, there was more of a split between panelists. Williams said England’s chancery and equity courts at common law were inquisitorial in nature and were quite effective in resolving cases quickly. Donald pointed out that while the adversary system is fundamental to the U.S., fewer cases are going to trial. And Clarke posited that European attorneys would probably prefer an adversarial system, noting that lawyers can only address the court for a limited amount of time.

Personal liberty was another topic debated. Williams thought habeas corpus might not have developed the same way without the Magna Carta’s famed Article 39.

“I think habeas corpus would have struggled without it,” he said. “It’s hard to explain why someone should be released when the king says that he can do what he wants.” Clarke agreed, saying that habeas corpus on its face means the government must produce the body of the defendant in court. Over time, he noted, it has evolved so that the government must now justify its continued imprisonment of that defendant.

And it wasn’t all about the abstract. Noting the role that King John’s failed military campaigns against France had played in bringing about the Magna Carta in the first place, Clarke hammered home, perhaps, the biggest counter-factual regarding what would happen had it never existed: “I’d probably be speaking French right now,” he said.