How New York could change the game for its criminal defendants 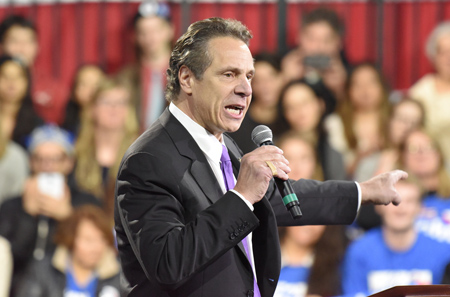 After decades of criticism from defense attorneys and others, Gov. Andrew Cuomo said Wednesday he would push to change New York’s “blindfold law,” which allows prosecutors to withhold evidence against a criminal defendant until just before trial.

“We need discovery reform,” Cuomo, a Democrat, said in his annual State of the State address. He announced the effort as part of a larger package of proposed changes to the criminal justice system, including eliminating cash bail for low-level crimes.

New York is one of 10 states where prosecutors can wait until a trial to turn over witness names and statements, grand jury testimony and other evidence known as discovery, which backs up criminal charges. In a front-page New York Times story this summer, The Marshall Project reported that the practice gives prosecutors a strategic advantage, especially because the vast majority of cases never make it that far: More than 98 percent of New York felony arrests that end in conviction occur through a guilty plea, not a trial. Defendants often plead guilty without ever knowing the strength of the case against them.

New York lawmakers have introduced bills to open up the process at least a dozen times in the last 25 years, but the measures have faced powerful opposition from the state’s district attorneys. Prosecutors argue that turning over details of witnesses puts them at risk for intimidation and worse.

John Schoeffel, staff attorney at The Legal Aid Society, called Cuomo’s support “the biggest thing to happen on discovery reform in 40 years.” The state’s discovery law has not been significantly updated since 1979, and this is the first time Cuomo has come out publicly in support of revising them. In 2015, a New York State Bar Association report called the current system “outdated and unfair.”

As is typical for a State of the State address, the governor did not offer many specifics. A press release accompanying the speech said he intends to introduce legislation requiring prosecutors to turn over information, including exhibits, the identity and backgrounds of witnesses and search warrant information, in stages. That would happen within three months after a defendant is arraigned, The New York Times reported Wednesday.

The release also said the plan will take steps to protect witness safety.

The measures are part of a larger proposed package of changes to the criminal justice system that include eliminating cash bail for misdemeanors and non-violent felony charges, and speeding up the trial process. In New York City in particular, defendants can languish in jail for months and years waiting for their day in court.

Cuomo’s support follows a trend toward more open discovery nationwide. Ohio broadened its laws in 2010. Traditionally more conservative states such as Texas and North Carolina have made sweeping changes to their discovery laws. And the American Bar Association, whose standards often serve as models for state laws, has convened a task force to update its criminal discovery standards for the first time in more than 20 years.