How to interrupt bias in the workplace 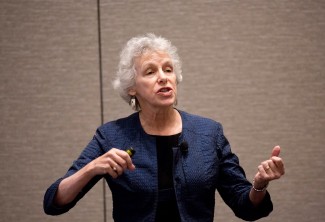 There’s no shortage of discussion about lack of diversity in the workplace, especially the legal profession. But solutions to the diversity problems and ways to combat implicit bias are harder to come by.

That’s where Joan C. Williams, a feminist legal scholar based at the University of California’s Hastings College of Law in San Francisco, comes in. With her daughter, Rachel Dempsey, she wrote What Works for Women at Work and in the process identified four primary bias patterns experienced by 96 percent of the women they studied.

Williams spoke Friday afternoon during an inaugural “GOOD Guys” program, “Why GOOD Guys—Guys Overcoming Obstacles to Diversity—Are So Important” sponsored by the Commission on Women in the Profession at the ABA Midyear Meeting in San Diego.

At the program, the women’s commission and the National Conference of Women’s Bar Associations honored men who help mentor and support the advancement of women in the profession. And the groups released The Good Guys Toolkit for individuals and organizations to use to deal with bias in the legal workplace.

Williams outlined four bias patterns that women may recognize: Prove-It-Again, women (and minorities) having to prove time and again that they are competent; Tightrope, balancing the push to be masculine against the expectation that women should be feminine; Maternal Wall, using family commitments as a reason to hold women back; and Tug of War, facing a loyalty test, or pressure to identify with their gender or a certain group in order to succeed.

To combat bias in each of these patterns, Williams developed common scenarios that managers or colleagues may see with example responses that would correct the issue.

For Prove-It-Again, Williams used the example of origination credit. A woman, she says, often will come up with an idea in a meeting. The idea is ignored when she presents it, but when repeated by a man it is perceived as brilliant.

Astute managers or colleagues could correct the bias by saying, “I’ve been pondering that ever since Pam first said it,” thus giving credit where credit is due.

When becoming aware of a Tightrope situation, a manager or colleague may see that women in a department are responsible for more of the following:

• The housework of planning parties.
• Meeting-planning logistics, staffing and billing.
• Undervalued work, including note-taking at a meeting.

To correct the issues, the manager would:

• Not ask for volunteers for party planning because women are under pressure to accept and men to decline.
• Assign support personnel to handle meeting planning.
• Establish a rotation for tasks such as note-taking.
• Have everyone do their own billing.

Maternal Wall issues may come up when a manager hears someone express uncertainty that a woman can do a task because of her child care issues. One possible response would be to call out the bias directly, saying: “I wonder if we’d say the same thing about a man.”

Video: A panel of experts, featuring high-powered corporate counsel, share insights on overcoming obstacles to diversity and advancing women and minorities at all levels of the legal profession.