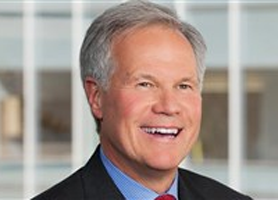 The scandal that led to the forced resignation of Latham & Watkins chairman William Voge began in November with two nights of sexting.

It ended in March after Voge’s legal threats against a suburban Chicago woman led Latham & Watkins to ask for his resignation. The Wall Street Journal viewed emails and texts exchanged between Voge and the woman, Andrea Vassell of Naperville, Illinois, and spoke with both of them.

Voge was in Chicago for November meetings when he swapped emails and then texts with Vassell, a woman who had accused an official with a Christian group of paying to have sex with her in the mid-1990s. Vassell said she was previously a sex-trafficking victim, and she alleged that the New Canaan Society official was the first customer.

The official had turned for help to Voge, a friend and a board member of the society. Voge encouraged a Christian mediation.

Voge sent messages about the dispute to Vassell from his hotel room in Chicago. But “the talk turned flirtatious, then sexual” and continued for about an hour, the Wall Street Journal says. More sexts followed later in the week. Voge and Vassell briefly spoke on the phone, but they never met in person.

Soon afterward, Vassell sent the sexts to the New Canaan official and the society’s chief executive. Voge resigned from the society’s board, told his wife what happened, and offered to resign from Latham. The law firm did not accept.

Voge sent a text apology and spoke with Vassell. She rejected the apology. “You are insane if you think I am not coming after you with everything I have,” she wrote. “Men abuse and exploit women and then the church that is dominated by male elders steps forward and tells the women to forgive. That stupid sh— stops with me!”

Voge’s lawyer, Terry Ekl, sent a letter to Vassell threatening legal action if she didn’t stop contacting people about the incident. Vassell emailed the letter to Latham and didn’t stop there. She emailed New Canaan Society members, Latham partners, another law firm, a few journalists and Voge’s wife. She also emailed Voge, sending more than 90 emails in all.

Vassell said she was compulsively sending emails. Some were sexual and some were angry. When Voge received a text from Vassell’s husband, Voge responded that Andrea Vassell was committing crimes. “It is not threats about jail,” Voge wrote. “She will be in jail!!!”

Ekl again told Vassell she was risking legal action. In March, Ekl heard from a lawyer who said Vassell was speaking with Law360. The lawyer reportedly said “at least six figures” would end the communications. Vassell told the Wall Street Journal she didn’t authorize the offer.