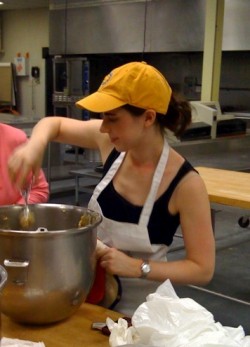 A trusts and estates associate at Hughes Hubbard & Reed has quit to pursue a new venture: baking and selling “Caveman Cookies” made with ingredients available to our early human ancestors.

Stephanie Lester’s cookies are made with nuts, honey and berries, and come in two varieties—original (at 65 calories) and tropical (at 70 calories).

Lester apparently has a flair not only for baking and legal work, but also for public relations. “Bucking the recent trend of lawyers leaving law to run cupcake trucks, a New York attorney has left the legal world to bake healthier fare suitable for modern day Homo sapiens as well as our Paleolithic ancestors,” she wrote in a press release.

Lester tells the ABA Journal that she got status as a limited liability corporation in June and started baking in August or September. One problem was how to get baked goods that are made from ground almonds rather than flour to look like cookies instead of globs.

She has perfected her recipe and is getting sales from her website, from a mention in a gluten-free magazine and from bloggers who tried the samples she sent. The blogs she targeted cover gluten-free foods or the caveman diet—which consists of foods that could have been hunted or gathered by early humans.

She has also been in contact with Whole Foods, and expects to be able to sell her cookies at the store’s Union Square location in New York City.

Lester has worked at Hughes Hubbard since her graduation from New York University law school in 2008. She says she quit her job Feb. 19 after the firm refused to allow her to work part time or to take a leave of absence so she could give more time to the business. Before that, Hughes Hubbard had allowed her to work a flexible schedule so she could juggle the demands of her venture.

Lester credits her legal background for helping her navigate the start-up work. “I felt much more confident handling issues like starting the LLC, applying for a trademark for Caveman Cookies, negotiating with people, or even just understanding contract law,” she says.

Lester is getting by with the help of savings, since she doesn’t expect the business to generate enough revenue to support herself for a few years. She also feels lucky because she has no law school or college loans. Several lawyers she spoke with at the firm said that, absent the burden of school loans, they also would leave.

She recalls an e-mail from another associate sent when she announced she was leaving. The e-mail said friends and family may question her decision, but many fellow associates are likely to be secretly—or even openly—jealous.

“That e-mail gave me a lot of confidence,” Lester says.