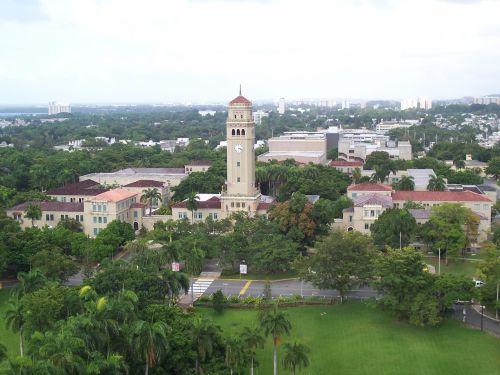 The University of Puerto Rico. Photo by y Ashig84, via Wikimedia Commons.

Hiram Meléndez Juarbe was one week into teaching law school classes at the University of Puerto Rico when Hurricane Irma hit, and before they could reopen, Hurricane Maria arrived.

The constitutional law and copyright law professor had evacuated Puerto Rico with his family and was staying in the Washington, D.C., area before Hurricane Maria landed. Meléndez Juarbe, a former associate dean at the law school,also had easy telephone and internet access, and he was in a good place to help second- and third-year law students panicked about finishing school.

At some point, University of Puerto Rico students starting calling law schools on the U.S. mainland and asking if they could take classes, Meléndez Juarbe said. “It started to become a little mess. People at the ABA’s Section of Legal Education started to chime in and said: ‘What’s going on?’ They wanted to make sure that things are done within the standards. Students can’t just go to law schools and take credits.” Meléndez Juarbe contacted law school deans through an e-mail discussion list to figure out with Legal Ed the best way to meet the University of Puerto Rico law students’ needs.

Ultimately, the group came up with a limited course load of approximately seven credits for students, which will be offered free of charge by five mainland law schools. According to Meléndez Juarbe, those schools are Florida State University College of Law, Touro Law Center, University of Pittsburgh School of Law, University at Buffalo School of Law and American University Washington College of Law.

The students will be classified as “visiting” or “transient,” Barry Currier, the ABA’s managing director of accreditation and legal education, told the ABA Journal in an email.

“That means that these students remain students at their home school, take credits at another school, those credits will transfer back to their home school and count toward the J.D. there,” he wrote. “Obviously, in the wake of a storm like Maria, there is some need to adapt, and we work with schools to do that.”

Approximately 40 Puerto Rico students, all of whom are in their second or third year of studies, will be taking the courses, which include two-credit seminars, independent study and externships.

“These law schools put things together very quickly. It’s really humbling to see the machinery at work,” says Melendez Juarbe, adding that a similar course load will be offered by the University of Puerto Rico when it reopens.

Also, the visiting students receive free or discounted housing for the semester. In some cases the schools made arrangements, according to Melendez Juarbe, and in other instances alumni and bar associations made donations. Also, he notes that the Association of American Law Schools and the Law School Admissions Council have offered help, as well as the Puerto Rican Bar Association of Florida.

“At one point the airports were closed, and many students couldn’t travel. The Puerto Rican Bar of Florida started moving heaven and earth, and got private planes,” Melendez Juarbe says.

The group also offered four students $600 scholarships, for travel expenses, and has provided housing funds, according to Marie E. Masson, president elect of the PRBF.

“We have a sense of gratitude not only to the five law schools that are doing this, but to the entire law school community,”Melendez Juarbe says. “It’s been amazing, and humbling.”