'I am not a racist,' lawyer says after viral rant about Spanish-speakers 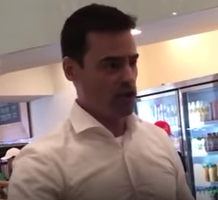 A New York lawyer who ranted about Spanish-speaking employees on a viral video says in a Twitter apology he is “deeply sorry” for his behavior.

Aaron Schlossberg said seeing himself online made him realize that “the manner in which I expressed myself is unacceptable and is not the person I am.” The New York Times and the Washington Post covered his apology.

“What the video did not convey is the real me,” he said on Twitter. “I am not a racist.”

Schlossberg was caught on a video last week complaining that employees at a midtown Manhattan restaurant were speaking Spanish to customers, even though, “It’s America.” He also threatened to call U.S. Immigration and Customs Enforcement “to have each one of them kicked out of my country.”

After Schlossberg was identified on social and traditional media, his law firm’s Yelp listing was flooded with negative reviews. He also had a virtual office with Corporate Suites that used the office address of a Madison Avenue building, but he is no longer allowed to use the company’s services, its president told the Times.

Schlossberg said in his apology that people should be allowed to express themselves freely, but they should do so calmly and respectfully. He says he moved to New York because of its “remarkable diversity.”

U.S. Rep. Adriano Espaillat of New York told the Times that Schlossberg’s apology is “too little, too late.” Espaillat is one of two Democratic politicians who filed a formal complaint against Schlossberg with the attorney discipline system.