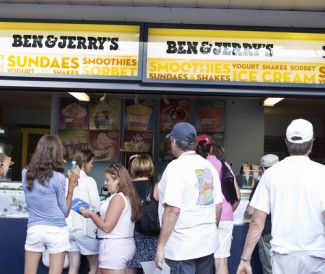 U.S. District Judge Lewis Kaplan also ordered Caballero, which apparently is operated by co-defendant Rodax Distributors Inc., to appear in court on Sept. 12 and show cause why a permanent injunction should not issue, according to Reuters and the Money & Co. page of the Los Angeles Times.

Although the news agency says a woman who answered the phone at Caballero’s office declined to comment, NECN spoke with the owner of a Northeastern adult novelty store chain who defended the concept.

“In general I don’t think anyone would get confused and think it has anything to do with Ben & Jerry’s brand image,” said Kayce Massey.

“Ben & Jerry’s filed a lawsuit on Wednesday, September 05, 2012 to halt the production and sale of pornographic material which utilized Ben & Jerry’s likeness. The ice cream maker acted to protect its company, brand, products and image. This is a clearcut issue where the video company is imitating Ben & Jerry’s logo, flavor names and trade dress to sell their products. We have taken prompt legal action to stop the manufacturing and sale of these materials.”