'I'd give anything to have the ABA work with the judiciary in Iraq,' UK trade envoy says 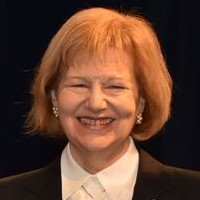 The rule of law as embodied in the Magna Carta needs to be brought to the people who need it most, said Baroness Emma Nicholson during her luncheon speech at the ABA London Sessions.

Nicholson made her remarks Saturday during lunch at the London Sessions, which are commemorating the 800th anniversary of the sealing of the Magna Carta.

Nicholson currently serves as the U.K. trade envoy to Iraq, a post she has held since January of 2014. Nicholson has been a member of the House of Lords since 1997, and before that, she was a member of the House of Commons for 10 years. She sits on the ABA’s Middle East North Africa Council. Nicholson also is the executive chair of AMAR International Charitable Foundation, which works with refugees in the Middle East.

ABA does valuable work to promote the rule of law around the world and to teach mediation, Nicholson said. “I’d give anything to have the ABA work with the judiciary in Iraq,” she said.

People throughout the world value the judicial process and hope it will bring them justice. She recounted a time she worked with a woman who had been kidnapped and eventually rescued. Upon release, the woman told her, “All I want is for the people who have done this to me to get to the courts,” Nicholson said.

Kurdish refugees in the Middle East, and in Iraq in particular, are facing harrowing times as they are displaced from their homes after civil war in Syria and the advance of the Islamic State group, Nicholson said.

“It’s a very, very difficult time indeed for the Iraqi Kurdish people,” she said. “I feel very troubled for them.”

As the refugee crisis in Iraq continues to worsen, the United Nations made a fresh appeal last week for $497 million for humanitarian needs in Iraq. 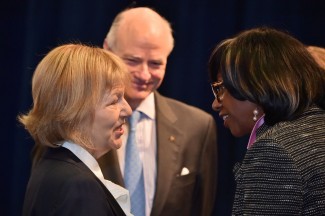 “Justice that doesn’t come or gives a lesser answer doesn’t seem to me to appease victims,” she said.

Nicholson said through her work around the world she has seen firsthand where new laws were able to stop illegal and immoral practices such as child trafficking in Russia.

The ABA London Sessions, which began Thursday, feature speakers, continuing legal education sessions, panel discussions and social events. It will culminate in a rededication of the ABA memorial at Runnymede on Monday, which will be attended by Queen Elizabeth II.