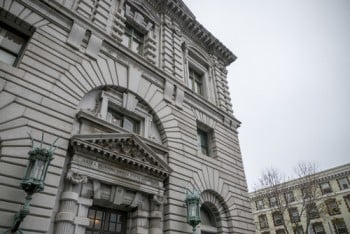 A federal appeals court has upheld an injunction requiring immigration judges to consider financial ability to pay and alternative conditions of release when setting bond.

The San Francisco-based 9th U.S. Circuit Court of Appeals was the first to find that the government can’t set unreasonable bonds for detained immigrants, according to a press release by the American Civil Liberties Union. Before the ruling (PDF), immigration judges weren’t required to consider ability to pay.

“While the temporary detention of noncitizens may sometimes be justified by concerns about public safety or flight risk,” Judge Stephen Reinhardt wrote for the 9th Circuit panel, “the government’s discretion to incarcerate noncitizens is always constrained by the requirements of due process: No person may be imprisoned merely on account of his poverty.”

The immigrants in the 9th Circuit case were not found to be dangerous or a flight risk, yet some remained in detention for years because they couldn’t afford to pay bond, report the Los Angeles Times and the San Francisco Chronicle.

The ABA had filed an amicus brief in the case that said immigration courts should be required to consider ability to pay and flight risk before deciding on bond.

Meanwhile the U.S. Supreme Court on Tuesday is considering another 9th Circuit ruling that held immigrant detainees were entitled to a bail hearing after their detention exceeds six months, according to another ACLU press release. The case, Jennings v. Rodriguez, was accepted last term but arguments were rescheduled, SCOTUSblog previously reported. An ABA amicus brief in that case backed a bright-line rule fixing the time period for a bond ruling.