Impeachment articles against Rosenstein tabled 1 day after being filed 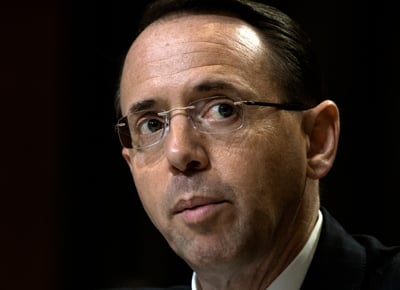 The lead sponsors of the impeachment resolution are Rep. Mark Meadows of North Carolina and Rep. Jim Jordan of Ohio, who are co-chairs of the House Freedom Caucus, report the Washington Post, the New York Times, BuzzFeed News, NPR and the Hill. A press release is here and the impeachment articles are here.

However, on Thursday, Meadows said he is tabling efforts to impeach Rosenstein and will instead consider holding him in contempt if documents are not produced, Courthouse News Service reports.

The Times describes the original move as “a long-shot bid” that was “as much as a political maneuver as an act of congressional oversight.”

Meadows told Fox News on Wednesday that he could refile the impeachment articles through a “privileged motion,” which would require a full House vote within two days. Jordan’s office also confirmed the option is still under consideration, according to BuzzFeed.

The resolution cites a failure to fully produce documents, unnecessary document redactions, Rosenstein’s approval of a request to renew surveillance of a former Trump campaign adviser, and concerns about the basis for the special counsel probe.

“We’re tired of the Justice Department giving us the finger and not giving us the information we’re entitled to,” Jordan said Wednesday in the Fox News interview.

According to the Times, the Justice Department has “largely produced” documents sought in subpoenas, but Republicans have complained the response was slow and some information was wrongly withheld.

Top Democrats on three House committees released a statement saying the resolution is a “direct attack” on Mueller’s investigation.

“My deputy, Rod Rosenstein, is highly capable. I have the highest confidence in him,” Sessions said. Congress should focus on legal challenges such as illegal immigration, he said.

Information about a privileged motion added at 8:40 a.m. Information on Sessions added at 10:54 a.m. Updated on July 27 to report on Meadows’ decision not to pursue impeachment.