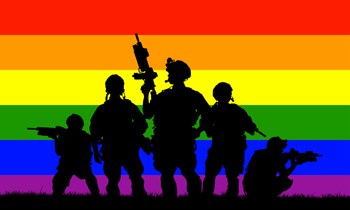 In a 5-4 vote, the Supreme Court lifted nationwide injunctions preventing implementation of the policy, report the New York Times and the Washington Post. The injunctions had been issued by federal judges in California and Washington state.

The policy generally bans people from the military with a diagnosis of gender dysphoria who require medical treatment to change their gender. Also banned from the military are transgender people who have undergone gender transition.

On Jan. 4, the U.S. Court of Appeals for the District of Columbia Circuit dissolved another injunction that had blocked the restrictions.

The American Civil Liberties Union noted in a tweet that the Supreme Court did not lift a nationwide injunction in its Maryland case, Stone v. Trump.

Technically, the Maryland injunction still stands, according to the Washington Blade. But the U.S. Justice Department will likely be back in Maryland federal court renewing its motion to stay the injunction in light of the Supreme Court’s action, said Sharon McGowan, legal director for Lambda Legal, in a Washington Blade interview.

“Such injunctions previously were rare, but in recent years they have become routine,” Francisco told the Supreme Court. “In less than two years, federal courts have issued 25 of them, blocking a wide range of significant policies involving national security, national defense, immigration and domestic issues.”

Todd A. Weiler, the former assistant secretary of defense for manpower and reserve affairs, was part of the team that implemented the original policy permitting transgender service. In a statement after the Supreme Court acted on Tuesday, Weiler said the military “must be a mirror of the nation.”

“The military struggles to make recruitment numbers, and unfortunately we continue to see the same families and communities bearing the brunt of service to nation,” he said. “To artificially restrict service to those that look or act a certain way is to make our country less safe and our military less ready.”