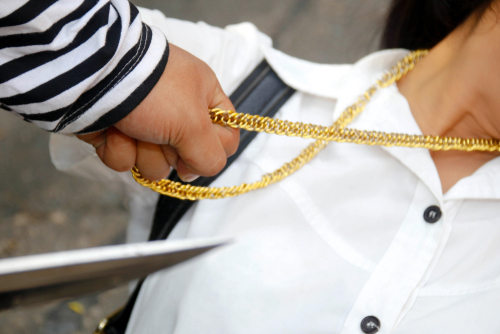 The U.S. Supreme Court’s newest member, Justice Brett M. Kavanaugh, joined in an unusual majority lineup on Tuesday in a decision that deemed a necklace snatching to be a violent felony under an enhanced sentencing law.

Justice Clarence Thomas wrote the majority opinion holding that Denard Stokeling had to be sentenced under a federal law setting a minimum 15-year sentence for some repeat offenders. He was joined by Kavanaugh, along with Justices Stephen G. Breyer, Samuel A. Alito Jr. and Neil M. Gorsuch. Breyer is a member of the court’s liberal wing.

The case was the first one heard by Kavanaugh in oral arguments after he joined the court. The Washington Post, the National Law Journal and the New York Times have coverage of the decision.

The law is the Armed Career Criminal Act, which requires a minimum sentence when a person convicted of a federal firearms offense has at least three prior violent felonies.

Stokeling had been convicted of being a felon in possession of a gun after he acknowledged having a gun in his backpack during a robbery investigation. His lawyers had argued that one of his prior crimes—a robbery conviction for necklace snatching—didn’t qualify as a violent felony.

Stokeling’s lawyers argued that a crime isn’t violent unless it requires physical force that is reasonably expected to cause pain or injury.

Thomas disagreed. Stokeling’s necklace-snatching conviction was under a Florida law that requires proof of resistance overcome by physical force of the offender. That makes the crime inherently violence, Thomas said.

“Robbery that must overpower a victim’s will—even a feeble or weak-willed victim—necessarily involves a physical confrontation and struggle,” Thomas wrote.

Thomas said Stokeling’s proposed standard is inconsistent with the common law definition of robbery and would be “exceedingly difficult” to apply. “We decline to impose yet another indeterminable line-drawing exercise on the lower courts,” Thomas wrote.

In a dissent, Justice Sonia Sotomayor argued that Thomas’ opinion distorted prior precedent. The majority cited the case, but honors it in the breach, Sotomayor wrote. She was joined by Chief Justice John G. Roberts Jr. and Justices Elena Kagan and Ruth Bader Ginsburg.