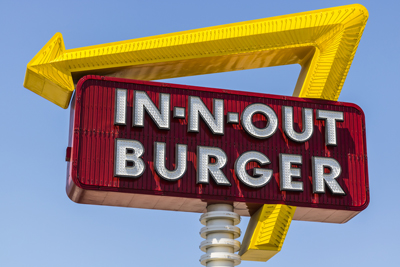 In-N-Out Burger has advised the makers of In-N-Stout beer that it wants to “hop to action” to resolve a “brewing” trademark issue “in good spirits.”

In-N-Out sent its pun-filled cease-and-desist letter to San Francisco-based Seven Stills Brewery & Distillery after it touted the upcoming release of its In-N-Stout beer, report Above the Law, the San Francisco Chronicle and the San Diego Union-Tribune in stories published last week.

Seven Stills used Instagram to promote its beer, described as a barrel-aged Neapolitan milkshake stout, and tagged the In-N-Out burger account. The pictured can featured a similar look to the burger chain’s logos.

Seven Stills posted the cease-and-desist letter to Instagram with the caption, “Can you find the puns?!?”

The letter begins by noting that In-N-Out has received multiple reports about the beer. It continues:

“The In-N-Stout Beer label features In-N-Out’s trademarks, including our palm tree and arrow logos along with a substantial similarity to In-N-Out’s brand name. Based on your use of the trademarks, we felt obligated to hop to action in order to prevent further issues from brewing.

“In case you are not already aware, In-N-Out owns multiple trademark registrations in these marks. As you may expect, we tap into a lot of effort in protecting our marks, which includes limiting their use by others.

“Please understand that use of our marks by third parties ales us to the extent that this could cause confusion in the marketplace or prevent us from protecting our marks in the future. We hope you appreciate, however, that we are attempting to clearly distill our rights by crafting an amicable approach with you, rather than barrel through this.

“Accordingly, we request that you refrain from further use of In-N-Out’s marks by not selling or promoting items featuring our marks, and removing images of ‘In-N-Stout’ and any other items featuring our marks from your website and social media pages. Please contact us as soon as possible, so this does not continue to ferment. Thank you for your time and consideration, and we look forward to resolving this in good spirits.”

Seven Stills co-owner Tim Obert told the Chronicle that the company expected to receive a cease-and-desist letter, and the beer is being released with different packaging.

Seven Stills later released a video that blurs the In-N-Out look according to the Union-Tribune. The ad says the brewery will not be releasing “some cheap copyright knockoff,” and promises that the first 100 people who buy a can at the brewery will receive a free burger from In-N-Out.

“Cease being late!” the ad says. “Desist missing out!”

ABA Journal: “Shut up! The art and craftiness of cease-and-desist letters”

Gallery: “The art and craftiness of cease-and-desist letters”