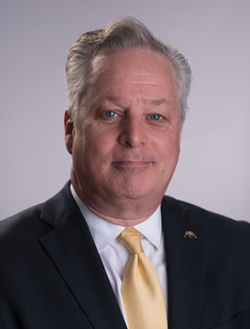 Tom Bolt is a Section Member-at-Large on the ABA Board of Governors, and shareholder and managing attorney at BoltNagi in St. Thomas, U.S. Virgin Islands. His firm’s office was heavily damaged by Hurricanes Irma and Maria.

As someone who had lived in the U.S. Virgin Islands since he graduated from law school in 1982, Tom Bolt has experienced hurricane damage firsthand.

“In 1989 we had Hurricane Hugo, which devastated St. Croix,” says Bolt, shareholder and managing attorney of BoltNagi P.C. and member of the ABA Board of Governors. “Then in 1995 we had Hurricane Marilyn, and it basically totaled my home. After that, we said ‘never again,’ and we built back stronger and better than before.”

But Hurricanes Irma and Maria were still strong enough to destroy the BoltNagi law office on St. Thomas, which he describes as totaled. “It was kind of a combination, one-two punch,” says Bolt. “Irma peeled off the roof, and then Maria saturated everything inside.”

In the wake of the historically catastrophic Hurricane Harvey, as well as Irma and Maria, the ABA has been working with federal, state and territorial groups to provide disaster assistance to those affected. For the U.S. territories of Puerto Rico and the U.S. Virgin Islands, the need has been particularly great because power and telecommunications infrastructure will not be as easy to restore.

“If you have a natural disaster such as Florida with Hurricane Andrew (in 1992), you’ve got people who can immediately come in from Georgia, Alabama and surrounding states,” Bolt says. “Here, the only way you’re getting in here is by plane–and the airport was closed until today–or by boat. So, you’re isolated somewhat in these insular territories.”

One important project has been establishing legal assistance hotlines. In the case of the U.S. Virgin Islands and Puerto Rico, these had to be hosted on the mainland because stable telecommunications and power are not yet available. The ABA announced the formation of a hotline for U.S. Virgin Islanders last week, hosted by the Louisiana Civil Justice Center.

The LCJC will also now be serving callers from Puerto Rico, the ABA announced in a press release Wednesday. Islanders can call 800-310-7029 from 9 a.m. to 4 p.m., Monday through Friday. Simple questions about issues like how Federal Emergency Management Agency (FEMA) claims are filed can be answered over the phone, and information will be collected so callers can be referred to attorneys who are barred in the appropriate jurisdictions. The addition of Puerto Rico to the hotline was made possible through a partnership with the ABA Young Lawyers Division’s Disaster Legal Service Program, FEMA, the Puerto Rican Bar Association, Puerto Rico Legal Services, Inc. and Community Law Office, Inc.

BoltNagi has been assisting in the efforts to meet the immediate legal needs of people in the U.S. Virgin Islands, having relocated to a temporary office on St. Thomas.

“You go immediately from being a functioning private law firm to doing things like providing disaster legal services, and we were used to that,” Bolt said. “I think our experience helped us there.”

But the staff is also having to deal with the same aftereffects of the disaster as the other islanders.

“Many of the lawyers in our firm have no power, no cell or telecommunication,” Bolt says. “So what we’re doing is that one person brings in bags of ice to make it a little bit easier, someone volunteers to wash clothes for people—I mean, it is almost like a communal coming together, and that has helped also.”

Disaster-preparedness steps the firm had previously taken have paid off, and Bolt credits lessons he learned as the former chair of the ABA Law Practice Division. “We had significant backups, not only on site but in the cloud,” he says. Having photos of the interior of the law firm office before the hurricanes hit, along with a detailed inventory of what was in the building, has also been helpful.

One piece of advice Bolt has for all firms is to develop detailed disaster policies. “What happens? What relief do you give employees, what is the routine once a hurricane watch is announced, what do you do, step one, two, three, four, five,” he says.

The road to recovery will be a long one, but Bolt says that the experience has made him value his ABA membership more than ever.

“I’ve had more outreach from members of the American Bar Association than any one group,” Bolt says. “It’s been a tremendous outpouring. Because of my affiliation with the ABA’s Law Practice Division, so many people reached out to ask, ‘What can we do to help?’ And they have. Recommending various things and various products that might be of help. It has been tremendous, it really has.”

Resources for lawyers looking for ways to assist those affected by the hurricanes are available at ambar.org/DisasterRelief, hosted by the ABA’s Committee on Disaster Response and Preparedness. The committee also tweets at @ABAResilience. If you are a U.S. Virgin Islands lawyer and wish to volunteer, please contact attorneys Casey Payton or Alex Golubitsky at [email protected] or [email protected]