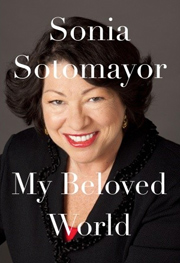 A new memoir by Justice Sonia Sotomayor, scheduled for publication in January, explains a primary reason she opted not to have children: a fear of early death.

Sotomayor has struggled with diabetes since childhood, and she says the fear of dying early was a big factor in her decision against motherhood, according to an Associated Press review of the book. The 58-year-old justice says she sometimes regrets that decision.

The book, My Beloved World, tells of Sotomayor’s impoverished childhood and her achievements until she became a federal judge in 1992, according to the AP account. Sotomayor tells of blackouts from diabetes in which she was found by a roommate, a client and a friend’s barking dog. She says the blackouts have become less frequent in the past decade.

Sotomayor acknowledges she benefited from affirmative action and her Hispanic background aided her Supreme Court nomination. But she made the most of the boost that helped her win admittance to Princeton and Yale Law School, graduating Phi Beta Kappa with highest honors from Princeton.

Sotomayor received a $1.2 million advance for the “unusually personal book for a Supreme Court justice,” AP says. The memoir will be published in English and Spanish.