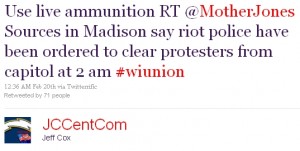 A deputy attorney general in Indiana recently tweeted some advice for police facing pro-labor protesters in Wisconsin: “Use live ammunition.”

The comment and others, made in response to a Feb. 19 tweet by a Mother Jones writer, have ended badly for the government lawyer, Jeffrey Cox. He is now out of a job, according to CNN, the Associated Press and Mother Jones.

The Indiana Attorney General’s office explained its decision in a statement. “We respect individuals’ First Amendment right to express their personal views on private online forums, but as public servants we are held by the public to a higher standard, and we should strive for civility,” the AG’s office said.

According to Mother Jones, Cox said the protesters were “political enemies” and “thugs” who were physically threatening lawmakers, and he called the publication’s reporter a “typical leftist.”

Cox often expressed acerbic opinions on Twitter and his blog Pro Cynic, Mother Jones says. He called President Obama “incompetent and treasonous” and said a black teen was a “thug who was (deservedly) beaten up” by local police as he tried to prevent the arrest of his “equally thuggish” brother. The blog has since been taken down, but Mother Jones has published screen shots, and some stories still appear on cached pages.

Cox was conciliatory in an interview with CNN affiliate WRTV, saying his comments were intended to be satirical. “I think that in this day and age that tweet was not a good idea, and in terms of that language, I’m not going to use it anymore,” he said.

George Washington University Law School Professor Jonathan Turley wrote at his eponymous blog that he spoke to Cox. Turley said Cox told him that his superiors at the Indiana Attorney General’s office were aware of his blog even back in 2004, when his posts were anonymous; Cox only started using his real name on his blog in 2006, after senior staff told him he did not need to keep his posts anonymous, assured him that he couldn’t be punished for blogging as long as he did not associate his position with his blog posts, and asked that he steer clear of Indiana issues in his posts.

Turley said Cox told him that Mother Jones reporter Adam Weinstein first contacted him at his work e-mail address, but Cox responded from his personal e-mail address. “When Weinstein again replied using his work address, Cox said that he answered his questions using his personal account,” Turley wrote. “The connection made in this context to the office was not apparently made by Cox but by Mother Jones magazine.”

Turley thinks that these facts, among others detailed in his post, if proven would make a strong free speech claim for Cox. “There is obviously a great deal of anger over these comments, but the real question is whether a public employee like Cox has any protection for comments made as a private citizen.”

Updated at 4:46 p.m. to include information from Turley’s post.