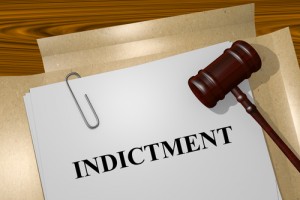 Updated: The staff attorney/law clerk accused of donning robes and ruling in traffic court cases is facing a criminal indictment, but she is determined to remain in the race for a judgeship in Cook County, Illinois, according to her lawyer.

Rhonda Crawford has been indicted on two criminal counts, according to lawyer Victor Henderson. He tells the Chicago Tribune and the Chicago Sun-Times that Cook County prosecutors told him of the indictment, but did not specify the charges.

Later on Friday, Crawford was arraigned on a felony charge of official misconduct and a misdemeanor charge of false impersonation, the Chicago Tribune reported in a subsequent story.

Troubles are mounting for Crawford. Last Friday, the Illinois Attorney Registration and Disciplinary Commission sought Crawford’s immediate suspension and asked the state supreme court to block her from becoming a judge if she wins the election.

Crawford is running for a judgeship covering parts of Chicago and some suburbs. There is no opponent on the ballot, though another judge who had a temporary court appointment is mounting a write-in campaign for the seat.

Henderson said Crawford has no plans to drop out of the race. “She’s not going anywhere,” he told the Tribune. “She is going to fight the good fight.”

Crawford has said she wore the robes and sat in a judge’s chair Aug. 11 as part of a shadowing process, and she was always under the direction of the judge. The judge accused of allowing Crawford to take her place, Valarie Turner, was removed from the bench and reassigned to administrative duties. She has been on medical leave since Aug. 22. Crawford was fired from her law clerk/staff attorney position at the courthouse in the Chicago suburb of Markham.

Turner was not expected to be charged, according to the Tribune. According to court papers filed on Friday, Turner believed Crawford was indeed a judge.

The ethics complaint filed against Crawford provide more details about the alleged incident. The complaint says that, near the end of her afternoon court call, Turner announced that “we’re going to switch judges” and gave her judicial robe to Crawford. Crawford didn’t correct the misstatement, put on the robes and took the bench, the complaint says. Turner stood behind Crawford.

Updated on Oct. 22 to include the charges against Crawford and court papers indicating Turner thought Crawford was a judge.